Warrior of the Light | Paulo Coelho

Since I've been doing a lot of exam studying, there has only been some light reading.

I've just finished Paulo Coelho's 'Warrior of the Light' which has some inspirational quotes. A lot of them are pretty wishy-washy, in my opinion... but I'll quote my favourite... as it relates to my life, as it may yours.

"Sometimes the Warrior feels as if he were living two lives at once.

In one of them he is obliged to do all the things he does not want to do and to fight for ideas in which he does not believe. But there is another life, and he 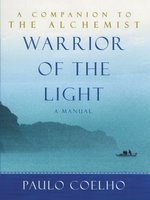 discovers it in his dreams, in his reading, and in his encounters with people who share his ideas.

The Warrior allows his two lives to draw near. 'There is a bridge that links what I do with what I would like to do,' he thinks. Slowly, his dreams take over his everyday life, and then he realizes that he is ready for the thing he always wanted.

Then all that is needed is a litter daring, and his two lives become one."
Posted by Eclectic Indulgence at 10:26 PM