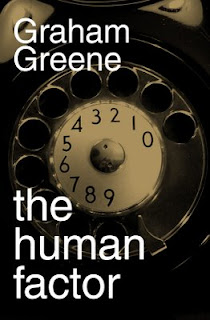 My love of reading began as a child, with Franklin W. Dixon's "Hardy Boys" series.  I suppose that I'd probably classify them as rubbish if I went back to read them as an adult, but I enjoyed the plot lines and keeping track of all the novels I read in an orange notebook.  The reason I bring this up, is because I believe the last time I read a mystery (other than 'The Da Vinci Code" and "Angels & Demons"), was during my adolescent Hardy Boy years.

As a consequence of my limited experience in mysteries, I don't feel like I can testify how this book stacks up against others in the genre.  I haven't delved into the genre for a reason - it's typically formulaic, violent and contains suspense driven prose (with little to no literary merit).

Greene's novel is none of these things.  There is no violence in the movie - no car chases, no shooting matches, no stabbings, no ghosts, no frivolous scene drama (ie: fog and street lamp glow).  It's a simple spy novel, without much of the formulaic drivel.  The characters are believable and completely held my interest.  The plot was dramatic, but not over the top - and it was completely believable.


In his 1980 autobiography Ways of Escape, Greene wrote that his aim with this book was "to write a novel of espionage free from the conventional violence, which has not, in spite of James Bond, been a feature of the British Secret Service. "I wanted to present the Service unromantically as a way of life, men going daily to their office to earn their pensions." Writing in his 70s, Greene drew on his own experience in MI6 and explored the moral ambiguities raised by his old boss, legendary Soviet double agent Kim Philby, although Greene stated that Castle, the main character in the novel, was not based on Philby.


Another theme Greene explored was what he considered the hypocrisy of the West's relations with South Africa under apartheid. He thought that even though the West publicly opposed apartheid, "they simply could not let South Africa succumb to black power and Communism" (from the Introduction to the 1982 edition of The Human Factor).

The background of the British Secret Service's view on apartheid was prevalent, and gave me something to research a little further on completion of the novel.  The dichotomy of the English helping versus not getting involved seemed present, and as you read you had to remind yourself of the position of the Secret Service.  At some points, you feel as though they were part of the solution and others, as if they were part of the problem.  In a world of double identities and double meanings, this was a great complementary theme.

The main character, Maurice Castle, was intelligent and likable - you couldn't help but to root for him.  The secret service's job was presented as a difficult one, coupling intelligent leaders with gun-slinging cowboy types.  It reminded me slightly of the corporation, and also of the military.  You have well-rounded leaders and you have people concerned for 'the greater good' (or possibly ambition), which in some cases leads to large mistakes.

I read this novel in a few days, because I really enjoyed it.  The stripped down plot complemented the importance of the dialogue - the struggle of minds in every day interactions.  I found this part of the novel the most fascinating; it was one of the reasons why most spy novels (in my limited experience) don't compare with this one.

As I read the novel, I found myself frequently over thinking.  In my head, there were double agents all over and I was certain there were a few more people in on it.  I was disappointed, to an extent, that this book was oversimplified, but as I read Greene's motivations for writing the novel, I think he hit the nail on the head.  I had a chance about a year ago to purchase all Greene's work, but I declined; it would be interesting to see how this book stacked up against the rest.  As an aside, I would probably read "The Quiet American" first - as I loved the movie, staring Michael Caine.

QUOTATIONS:
"You can never go back to your childhood." 77
"Happy people don't notice if it's winter or summer." 278
Posted by Eclectic Indulgence at 12:07 PM