Review: The Iliad by Homer 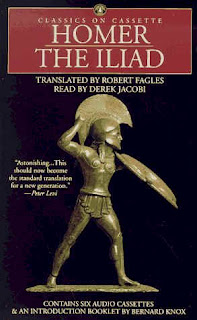 It's been a long time now since I read 'The Iliad', so it's finally time to write a review.  Initially, I wanted to let the story sink in to see how it aged in my mind.  Eventually, I found that I was just getting a little bored of doing reviews and it didn't seem to fit into my schedule.  But I find that the time taken to write these reviews is worth it in the end, because I can tell where my head space was looking back through the course of my life.  If I re-read any of the classics that I love, will I still feel the same way about them years later?  I have heard that many who loved 'The Catcher in the Rye' when they were adolescents, don't feel the same connection to Holden as they did when they first read the novel.  (Parenthetically, I've read it three times now, and I feel just as strongly about it now that I did then).  But I digress.

I actually really liked the Fagles translation of this. It might have helped that I had a beautiful edition. I was also surprised at the lack of the Trojan horse! And that the gods were so petty and useless. It's been a couple of years since I've read it, but I'm sure you must be right about the center of the story being the struggle of Achilles. I think the first line says something about telling the "rage of Achilles."

I LOVED The Iliad when I read it a few years ago. I really need to revisit it. Or at least get to the Aeneid, which I STILL haven't attempted.

I like your thoughts and observations associated with your reading of The Iliad. I tend to also think of it as a narrative that presents, to some degree, a psychological analysis of Achilles, and to lesser degrees of Great Ajax, Menelaus, Agamemnon, Paris, Hector, and Priam--

Lattimore's translation sets the stage for this analysis in the first three lines of Book 1:

"Sing, goddess, the anger of Peleus' son Achilleus
and its devastation, which puts pains thousandfold upon the
Achaians,"

Fagles makes it even stronger:

"Rage--Goddess, sing the rage of Peleus' son Achilles,
murderous, doomed, that cost the Achaeans countless losses,
hurling down to the House of Death so many sturdy souls,"

This is what I love about Homer's The Iliad, and I now realize that a lifetime of study remains for me to delve into its pathos, drama, and experience the richness of emotion that comes from every line. It just may be the most important literary work that humankind has been gifted with.

I am very much looking forward to reading Stephen Mitchell's brand new translation coming out in early-October. Great post, my friend, I very much enjoyed it! Cheers! Chris