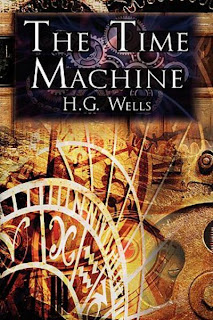 I have recently discovered that I really enjoy old science fiction classics. I’m a little upset that my parents didn’t see my fascination with The Hardy Boys mysteries (I should read a few to see how horribly they translate as an adult) and Tolkien fantasy in grade school and turned me on to some science fiction from the likes of Jules Verne and H.G. Wells. I’m sure I’ve stated this in Verne posts prior to this review on “The Time Machine”, but there is something for everyone in these types of novels.


As a child, the adventure present in these works is very appealing and the book provides a completely different perspective on life and our place in the universe which was mind expanding during youth. However, due to a primitive understanding of the universe and how humans function within it, much of the subtleties of this work in particular would have gone over my head.

“The Time Machine” is a short novel by H.G. Wells that details the first created time machine and a professor’s experiment with time travel. As I understand it, the term “time machine” was originally introduced to society through this work. Can you imagine how intriguing it would have been to hear the term for the first time prior to reading the book and prior to humans being aware of what existed on planets like the moon? But I digress.

**SMALL DEGREE OF SPOILERS BEYOND THIS POINT**

This story was published in serial and reads like it. Each chapter has a very specific point, and as I read I wrote a one line synopsis for each one. The first chapter relates the professor’s initial trial with a model time machine and in the second chapter, the time traveler comes back to join his educated friends for dinner after a long time spent in the future – an event that comprises the whole of a novel through the re-telling of the story.

The professor travels forward in time to the year 802,701AD, where he encounters a very different earth. All the people are 4 feet tall, elegantly dressed and seem to spend all their time in leisure. They are slightly dimwitted, produce no goods and eat only fruit. Conversely, there is a subterranean race which only comes to the surface at night, eats meat and is very resourceful.

The theory postulated by the professor is that at some time, the working class was sent underground because the rich ended up owning all the surface land. Consequently, the surface people consumed and the subterranean produced and this happened for generations. Thus, the surface people devolved (physically and mentally) and Wells’ states the reasons for this quite eloquently: “There is no intelligence where there is no change and no need of change.” Ch10

The evolution of the subterranean people was like most organisms that live in caves. They lose their pigmentation and their eyes become very sensitive to light (I digress here, but after an even longer period most eyes are lost through evolution because they become superfluous). Due to the fact that they continued to produce and think, they became very intelligent and intuitive. Here’s what Wells states about the reasoning behind the evolution of the subterranean world:

“…industry had gradually lost its birthright in the sky. I mean that it had gone deeper and deeper into larger and ever larger underground factories, spending a still-increasing amount of its time therein, till, in the end—! Even now, does not an East-end worker live in such artificial conditions as practically to be cut off from the natural surface of the earth?” Ch5

I also love the fact that Wells’ blasts the functioning of modern society here, still applicable today in most areas of the globe. I have spent probably ¾ of my life indoors... and during this time in the fall/winter season, I no longer see the sun as I drive to and from work in the dark.

The concept of skills is also still practical today. I feel myself as if I have no tangible skills because I am not really producing any products, while people that earn far less than me are working in factories creating items for consumption or use. I have lost a large portion of natural intelligence because I do not need to do things like fix my car, because someone else will do it for me. Of course, I am still doing something... so I am not likely to lose all intelligence altogether. Think of for how many people are striving for a concept of spending their time NOT working but instead in leisure. That’s pretty much the definition of retirement for many people. In addition, this produces an interesting commentary about the trend of society at the time and foreshadows the growing divide between the rich and the poor.

My favourite line comes at the very end of the work, in the epilogue where Wells’ makes his most important and optimistic opinion of mankind when he states:

“And I have by me, for my comfort, two strange white flowers—shriveled now, and brown and flat and brittle—to witness that even when mind and strength had gone, gratitude and a mutual tenderness still lived on in the heart of man.” EPILOGUE

I will not delve into the meaning behind this, because it would ‘take the piss out of the whole thing’ – but even with the horror existent in such a society, there was still present the beauty of humanity. I wonder if the publisher made him change the ending to have an optimistic slant, to sell more books? ;)

Wells’ writing style was very simplistic and I didn’t find myself writing down literary devices used. It was more of a straight forward portrayal of ideas while making a commentary on the society at large and the direction the human race was going. I would recommend this to anyone looking for an easy but mind expanding read – probably a really interesting beach book for those of you who don’t really enjoy popular fiction. And if you have children in grade school, it may be a good idea to slip this book onto their bookshelf or next month, into their Christmas stocking.


Other works I’ve read by Wells:
“The Invisible Man” - read in grade school
“The War of the Worlds” – read between high school and university.

I remember the passion I had for 'The Invisible Man' as a child due to the story (reminds me now slightly of 'Dr. Jekyll and Hyde' which I read afterwards), but my thoughts on 'The War of the Worlds' have not withstood the test of time.
Posted by Eclectic Indulgence at 5:18 PM

Well done! I enjoyed reading your review. I read this about a year, or so, ago. I thought it felt a little stilted (and obviously dated) as far as scifi went, but recognized it for what it is--a really creative story that intelligently examines a myriad of different issues. I also had to wonder how much Wells' own socialistic beliefs influenced the plot of this novella. Cheers!

HG Wells is great, Jules Verne I have gone off of I have to admit. I read The Time Machine a couple of years ago I think and enjoyed it, but it was challenging for me because I grew up watching the old movie over and over again. The movie is sooo different to the book and I couldn't help but compare them the whole time