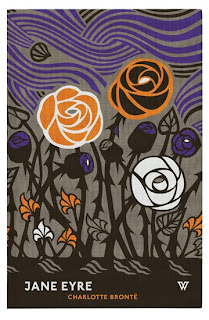 To be perfectly honest, I was slightly dreading sitting down with my copy of "Jane Eyre" out of fear of a repeat of emotions that I felt when reading Jane Austen's "Pride and Prejudice."  The latter novel pained me to no end, which was something altogether unexpected.  So, while I picked up "Jane Eyre" I did my best to not effect my expectations... but I must say that they were slightly lessened after reading Jane Austen.  Thankfully, Charlotte Bronte is a much better writer than Jane Austen.

The story begins with a young Jane Eyre, who is living with her aunt and cousins in England.  Jane's uncle died years earlier, and on his deathbed made his wife (Jane's aunt) promise to keep Jane Eyre and treat her like one of their children.  While Jane remained with the family, she was abused and treated like an inferior human being (worse than a servant).

After being shut up in a room for the day by her aunt (Jane was accused of hurting her cousin, though false) she passed out due to blood loss and fright by her perception of a ghost in the room at which she was kept.  After the doctor (an inferior doctor for servants only) arrived, he had a chat with her and she told him her story.  He asked her if she wanted to be in school, she consented and months later she was sent off to a nunnery.  This pleased her aunt, as she was finally rid of Jane.

Despite pestilence (Typhus outbreak) at the Lowood School, Jane Eyre lived and eventually became a teacher there.  After 8 years of the school, she took out an advertisement in a local paper and she was granted a governess position.  She eventually fell in love with the Governor, and he returned the feeling towards her.  On their wedding day, it was discovered that the Governor (Mr. Rochester) was already married to an insane women who lived in the attic.

Jane could not wed Mr. Rochester and she left early the next morning for the farthest town she could afford to get to.  Due to lack of money and therefore food and shelter, Jane passes out on the steps of someones house after she is refused entrance by the servant.  Eventually the head of the house comes home and takes her in and nurses her back to health.

She ends up working as a school teacher in town, and staying with the Rivers (John and his two sisters) only to find out when a relative dies that she is related to the Rivers.  She amasses a large inheritance (splits it with her three relatives) and eventually leaves the household and returns to Mr. Rochester, now blind and crippled from a fire in which his insane wife started (she died jumping off the roof).  Jane eventually weds Mr. Rochester despite his conditions and the two live happily ever after.  So it goes.

I'm not sure how this summary comes across - I have greatly simplified things on the account of space and time.  However, I really enjoyed this novel.  The characters were likable, the story was somehow not formulaic and the prose was excellent (the vocabulary of Charlotte Bronte was extensive).  I don't get a feeling for anything happening outside the story of these individuals, but I wasn't bothered by that as much as I was in "Pride & Prejudice" and I think that this is because there was so much more to latch onto.

Themes of love and perception were important and spirituality played a large role in events within the novel.  There was some excellent foreshadowing (the splitting of the chestnut tree in the storm) and the characters were described well - they seemed like real people with faults and strengths unlike the complete stereotypes in "Pride and Prejudice."

In sum, I really enjoyed this work.  Couple this with my positive experience with Wuthering Heights (written by Emily Bronte), and I must say that I have an affinity towards the Bronte sisters.  It's a shame that Charlotte only wrote three works (not including one published posthumously)... but I'm fairly certain that I will give another one of her novels a go (Emily only wrote one novel before passing away at the age of 30 due to TB).
Posted by Eclectic Indulgence at 6:38 PM

I had the same dread -- only I'd never read Austen. I ended up loving Jane Eyre. I'm about 100 pages into Wuthering Heights though, and so far I don't see what's to love...

Jane Eyre is forever on my list of classic favorites. I like the part when Rochester is humbled and finally admits his need to be with Jane who asserts her state of independence (towards the end). I've read Wuthering Heights, too, but it was not as memorable with me as Jane Eyre. I'm really glad you liked it, too.