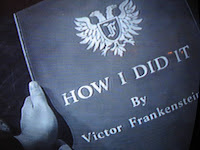 It's hard to keep up with all the books on your shelf that were written after you were born, let alone all the books written by authors long since left this world. Frankenstein's first edition was written by Shelley in 1818, and it's a remarkable read, even if only to compare it to what the tale has become in modern time.


There is definitely the theme of who is the actual monster, the beast or the creator. But the book also questions science - if we are doing things just for the sake of doing them or actually for the betterment of society. Does one create something to massage his own ego and give himself a feeling of self worth, or does one create something with a noble purpose in mind? In a day where the cloning of animals has been conducted, coupled with a million other scientific breakthroughs arguably created to improve our society, but more aptly... bring fortune to companies who pay for the research.
Frankenstein delves deep into the life of Victor Frankenstein's monster, and his craving to be loved. When he doesn't get his way, he seeks revenge for his treatment on his creator. Does his creator deserve this, since he is unable to give his monster any type of affection? Or is the creature he created an abomination that could never be accepted by man?
The thing that jumped out at me most about this novel, is that Victor Frankenstein was a common man who's pursuit of knowledge took him to the point of no return. How many times have we wanted to take something back, but couldn't? Do you think the man who created the atomic bomb could take back what he did? I have read somewhere, that he would.
Anyhow, I would recommend this book to anyone who wishes to get a real glimpse of what today's society has turned into an abomination. This book is heartfelt and powerful and in my opinion, a lot more fluid a read than I would have expected from an 1818 text. Enjoy.
QUOTES:
"A human being in perfection ought always to preserve a calm and peaceful mind, and never to allow passion or a transitory desire to disturb his tranquillity." 51, ln2
"The site of the awful and majestic in nature had indeed always the effect of solemnizing my mind, and causing me to forget the passing cares of life." 92 ln10
"For the first time, also, I felt what the duties of a creator towards his creature were, and that I ought to render him happy before I complained of his wickedness." 97 ln7
"To be a great and virtuous man appeared the highest honour that can befall a sensitive being; to be base and vicious, as many on record have been, appeared the lowest degradation, a condition more abject than that of the blind mole or harmless worm." 115 ln12
"Of what a strange nature is knowledge! It clings to the mind, when it has once seized on it, like a lichen on the rock." 116 ln12
"Increase of knowledge only discovered to me more clearly what a wretched outcast I was." 127 ln6
"The companions of our childhood always possess a certain power over our minds." 209 ln20
Posted by Eclectic Indulgence at 3:31 PM

You're definitely much more sympathetic toward Frankenstein than I can be!

I'm not going to read your Kafka post until after I've read Metamorphosis, which could be a while. But what do you think about having no moderator as such, but we each think of a couple of questions or themes or topics to discuss instead? Since we pretty much end up doing that anyway?

Yeah, that's a good idea about the lack of moderation. I like the structure sometimes, but with this short-story, may be a good idea to kaibosh it.

We should have discussed the whole male/female thing about Shelley. All the women were victims, but the men were villians. Was Shelley trying to make a statement, or was that indicative of 1818?

The women were definitely side-lined, but plenty of the men were victims too. Little William, his best friend Henry - even his father.

But it is a shame, how clear the line is between men and science and knowledge etc., and women. If nothing else, this book clearly says that women not only have no part to play in it, but should steer clear lest it corrupt their innocent souls.

Or maybe I'm just reading that into it, but I can't think of a female literary character with less backbone than Elizabeth.

Keep in mind that it was over a hundred years BEFORE women even had the right to vote...

...and I dont think that Shelley and Brontè had the same types of minds (although I have yet to read anything by either sister).

It's definitely a thought provoking book. I think that SHelley primarily meant this to be a book exploring the depths of human nature, but the theme of scientific advancement and experimentation is clearly a strong one.

No one is ever going to agree on cloning and other such scientific topics, but at least books like this encoueage us to think about our actions