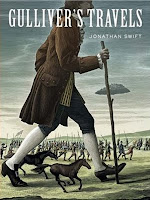 “Gulliver’s Travels” was first published in 1726, and is still valid 283 years later. The satirical novel chronicles the life of Lemuel Gulliver, a surgeon with a love of adventure and the sea. In his travels, Gulliver visits four unknown societies and learns their languages and their culture, at the same time detailing the culture of his native England. Inhabitants of these societies have values quite different from standard humans, and they don’t understand why we do some of the things we do. What we receive from Swift is a commentary on our way of life, questioning the fabric of our society.

Gulliver’s first adventure lands him in Lilliput, a land of people of a far less stature than Gulliver himself. Most of the Lilliputans are around six inches tall and are in a constant warring with another adjacent kingdom over the methodology in which they eat their eggs. It’s a great slight on religion, and some of the trivial things that religions fight over. How many people over the 283 years since Swift has written this novel, have died over a trivial point in a religious sect?

After a brief time at home with his family, Gulliver finds himself compelled again to the sea where he washes ashore amongst men which look like giants to him. The experience is the exact opposite in the native land of Brobdingnag than it was is Lilliput! He is caught by a giant and is given to his daughter as a pet. After Gulliver begins to learn the native language and shows off his swordsmanship skills to the family, the giant decides to take Gulliver on a circuit, showing him off like a circus freak to towns all over the nation. The constant exploitation tires Gulliver and renders him useless – he is the worn down shell of a man. Gulliver is sold into royalty, where he has many conversations with the king about English society and how it is run. It’s at this point that the commentary on some of the more absurd aspects of life are discussed, mainly regarding politics and the legal system. There was also quite a commentary on beauty and how when looking upon someone of gigantic size, blemishes and flaws are easier to note. Everyone has ‘flaws’ in their appearance, but that says nothing of their character.

After another brief stint in England, Gulliver travels to Laputa, a land founded on mathematics and astronomy. Gulliver is taken to a floating island, where movement is controlled by the master astronomers. In addition, he meets some magicians who have the ability to call upon the dead in order to serve them and promptly calls some prominent figures in history (ex: Alexander the Great) to discuss their life. It is here that Swift teaches us that history as we know it is not always a function of truth; lies are passed down through the ages and an accurate account of the lives of our heroes do not exist. In fact, the people that we look up to may not be heroes at all, for stories of heroes are rarely accurately recorded.

Shortly after this experience, Gulliver is taken to the mainland where he discovers nearly complete ruin. This society is obsessed with perfection, and is undergoing a tremendous amount of useless experiments in order to come up with perfect systems. As a result, they live in poverty and filth and are not progressing as a society. 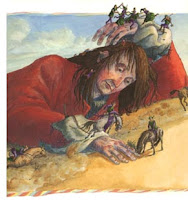 The last trip on the docket is to see the Houyhnhnms, a type of horse with extensive communication skills and a natural instinct towards sustainable living. They lived in conjunction with the Yahoos, which had nearly all the same features as humans and were regarded as nuisances who could not help but use up resources at a quick pace and exhibited no control or higher rational thought. After years of living with the Houyhnhnms and discussing their philosophies, Gulliver falls in love with their values and way of life and makes a resolution to stay. Circumstances do not allow this, and he is sent back to England where he is disgusted by society including his own family. Gulliver spends numerous hours with his horses which he believes he has some mutual understanding with.

Swift makes a continual note that this book is an effort, not to entertain us, but to tell us the truth. He is imploring us to challenge our histories, our way of thinking to discover the truth that exists in society. He’s trying to get us to break down the walls, destroy the machine and ultimately change the thinking of the world. This book was written to create a movement, starting with each person that reads it.

Now that I’ve discussed the heart of the novel, I wanted to talk a little bit on how it was structured. It took me a while to determine why the novel had so little commentary on society in Lilliput to eventually a complete explosion of commentary in the land of the Houyhnhnms. My theory is, that as one ages in life, the things he/she finds important change. Children are most concerned with toys, teens are most concerned with fitting in and as one converts to a young adult, he/she becomes more concerned with the state of society and the world. This book symbolizes a progression of mindset to me. Gulliver was once more concerned about operational issues relating to size differences and eventually he becomes more concerned with the functioning of his own society. His values have shifted and this novel displays that growth.

“Gulliver’s Travels” is tremendously satirical. There are a few aspects that don’t necessarily fit well within today’s multicultural and equal rights society. There was a comment made about a native language being much easier to understand than Chinese as well as numerous comments made about the female sex. Chalk it up to a sign of the times, but note that these discretions exist and add very little to the commentary.

The style in the novel I found very difficult at first. Nearly all the sentences are run-on and the point sometimes becomes muddled in the mind at the end of such a diatribe. I had to re-read quite a few sentences because I forgot where the point started from and it was necessary to see where Swift was going. All in all, for a book written nearly 300 years ago, the reading was not as difficult as I anticipated.

In summary, I enjoyed this book much more after a great book club discussion. This novel requires some time to stew and digest, but afterwards you are left with profound impact. The one thing about fiction, is that it is usually published as intended and held in stone (ignoring translations, posthumous works etc) and Swift’s work will be forever immortalized as a form of truth.
Posted by Eclectic Indulgence at 12:00 PM