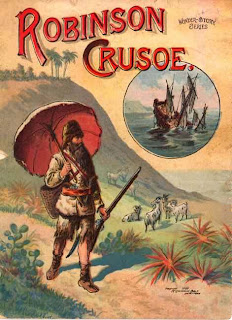 I've had a few very personal experiences with this book, which I suppose have added additional intrigue and enjoyment for me so I will preface by saying thus.
When I was traveling to the Dominican Republic, I first decided to read this book on the plane.  I probably figured that it would be a good book to read in a tropical locale, especially while on an adventure of sorts.  So as I get to this particular part where 'God unleashes his furious wrath upon the vessel', all of a sudden there is a jolt in the plane and the wing has what I remember as a 'fireball' on it.  All the passengers who were there with me saw it, so I wasn't crazy (at least in reference to this) and it took awhile for us to all calm down.  This was mainly due to the fact that the captain didn't let us know what happened right after the event.  We sat there for a few minutes wondering if we were going to plunge into the ocean or something and then he finally came on the speaker and let us know that our plane got struck by lightning - which he assured us was quite common (I don't know about this - I think he was bluffing).  I never really thought of this before, but I guess I've been technically struck by lightning!  Anyways, needless to say that I stopped reading the book... and didn't pick it up again until years later... it's probably been around ten years since that day.  Being me, I have always felt a little guilty for not finishing the work.  So when it came up for this month's book club selection I was pretty pumped - especially since I would be reading it on my couch and NO WHERE ELSE!

Now it's not really public knowledge (I guess it is now!) but I broke up with my girlfriend recently.  Not to dwell on it at all here, but I kind of felt like when Robinson Crusoe got stranded on a desert island... I could feel his isolation a little more.  He had to forage for food himself (I've been eating randomly), he probably didn't have impeccable personal hygiene at the time (I let grow a beard and sometimes skipped my morning shower) and he reflected a lot about Providence and listening to the little voice inside you.  So all these things had a strong connection with me, despite some annoying aspects of the novel.

For one thing, it annoyed me that my copy had no chapter breaks for 375 pages and it didn't even have any of those fun little ***'s that break things up.  When I stopped I just put the bookmark in and walked away, and would usually just read the two pages where I stopped at because I didn't know what paragraph I left off.

The other thing that was annoying was the fact that Robinson Crusoe was very self-centred.  He wanted to be the king of his island and felt he deserved that, not wholly because he was there for 28 years or so, but because he was English - it's like an American nowadays thinking that the world revolves around them and their country [not all think this way, but you can't argue that some do].  I guess this was a common perception in England at the time, but it just left a bitter taste in my mouth.  Couple that with the fact that he called the natives "blinded ignorant pagans" [264] and also referred to his friend as "this creature" [279].  And did I mention that he named his best native friend "Friday" because he met him on Friday... and introduced himself as "Master."  What an asshole - let's be honest.  He also said that his God was the "true God" [263] and for someone who is spiritual and open to most religions, this pissed me off.  I didn't hate all the bible thumping or references to Christianity but the above really drove me nuts.

In the beginning, it wasn't all about this though.  It was about one man who felt he had sinned by not listening to his parents and how he tried to make up for his mistakes to himself and God.  And of course, it was about the daily life he underwent with 28 years (mainly alone) on the island.  It was a little 'first I did this, then I did this and then I also did this', but I suppose that's the way you would talk about an experience if you had been there, isolated.

He did have some great moments of thought - what I would call quotable nuggets of wisdom - which I really enjoyed.  Eventually, I'll post some of them because they really made the book for me.  Some of the things I have been wrestling with lately, and feel to be inherently true, Defoe was writing about nearly 300 years ago, and I believe this is why the book has withstood the test of time amongst the literary crowd.  So depending on what camp you fall into, the literary camp or the adventure camp (or both), then there's something for everyone in here.  I think in that way, it eclipsed 'Treasure Island' - which was more about the plot.

I believe a lot of the time, this book followed a set cause and effect structure which was very matter of fact.  The way things seemed to fall in place for Crusoe (the items he received on his island) was very Hollywood to me - wrapped up in a neat package.  And then there were obvious things that weren't even referred to... like why he never even FISHED.  In the Ocean.  Where there are lots of fish!

Anyway, all in all I am glad I read this because it wasn't exactly what I was expecting.  I was pleasantly surprised in parts and glaringly disappointed in others, but thankfully the tidbits of wisdom were there and I felt a kinship with the isolated Crusoe, if only because of my personal circumstances.

For those of you who have read this, what did you think?
Posted by Eclectic Indulgence at 11:17 PM

I read this several years ago and I didn't really like it all that much, but I feel kinda guilty about it. I might try to re-read it here eventually.

Sorry to hear about your breakup. Those are very hard. Man, I don't know if I could read this one if there aren't any ****s. I gotta have things broken up for me occasionally. They make such great leaving-off points, don't they? And I take it after your plane trip that you will be traveling everywhere from now on by canoe? :) I wouldn't blame you one bit. Thanks for the review and hang in there.

I have a lovely old copy of Robinson Crusoe which I've now read twice. While I find it rambling in parts, I do still enjoy it.

I can relate to the plane troubles.

I can honestly say that I am not sure if I have read the entire unabridged version of Robinson Crusoe. I know I have read a lot of abridged ones with the children over the years.

I am hopping by today!

You have a nice blog.

Okay, I'm not sure why but your plane story conjured up images of the Twilight Zone episode, "Nightmare at 20,000 Feet." Have you seen this one? If not, it's about a guy who sees a monster on the wing of the plane but none of the other passengers ever see it. Thankfully, you had confirmation of your "fireball" sighting from other passengers. :)

I agree with much of what you said about Crusoe - except that I didn't feel much of a kinship with him.

His exclusive attitude towards religion was bothersome to me as well. I'd be interested to hear what nuggets of wisdom you took away from it. I think my irritation with Crusoe's superiority complex may have overridden any wisdom that I might have otherwise gleaned from it.

I'm sorry about your breakup, and I hope you feel better soon.

On the other hand, your experience on the plane was scary, but it sounds very exciting. It never occurred to me that planes could be struck by lightning. I'd be intimidated by Robinson Crusoe if that happened to me. :)