Review: The Way of All Flesh by Samuel Butler 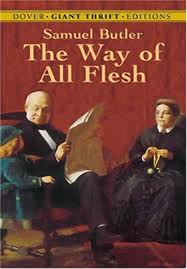 You can't begin to review "The Way of All Flesh" without first acknowledging that the book is intimately linked with Samuel Butler's life.  It is listed as a 'semi-autobiographical' work, and it's evident when reading the novel that Butler took this work very seriously due to how deeply personal it was.  The book was actually published after Butler's death, and was the only work of fiction that the author created.  The rationale for wishing that the work was published posthumously is largely credited to the 'attack' or subversive messaging in regards to Victorian society and the church, as well as family values.

Let me start off by saying that I truly enjoyed the work because it hit home with me.  The novel chronicles the lives of the Pontifex's, who grew up in Victorian era England, and is narrated by a close friend of the family... and the uncle (Edward Overton) of the main character, Ernest Pontifex.  Ernest is abused as a child, both verbally and physically by his parents, who insist they strongly love the boy and are doing the best they can do with such a terribly flawed son.  The 'love' they have for him is truly sickening, and Ernest spends much of his life trying to prove himself to his parents in an effort to obtain real love.  He seeks their praises and acceptance without knowing that all he does will never be good enough for his pastor father and backstabbing mother.

Ernest spends much of his life getting into bad situations, due in part to his constant desire for love and acceptance and part due to the naivety he has with the world.  Ernest is Butler, and based on how the novel is written, you cannot help but feel very sad for this young man as he continues to struggle until he ultimately comes into a large inheritance and he learns to live his life the way HE feels he should.  After a period in which his father disowns him, he makes a conscious decision to cut them out of his life when they try to visit him after coming out of prison.  He only attempts to make peace when his mother is on her death bed.

The novel is chalk full of great quotations, and hopefully I will revisit this review to add them all in.  It's easy to read, but as Shannon from Giraffe Days points out, there are 'long paragraphs of thought' which sometimes seem thrown in at parts and tangential to the story.  However, this insight is very valuable to the reader despite the fact that it takes much stronger concentration then the plot line.  The thoughts are so intertwined with the plot that to skip over them does the work tremendous injustice.

The beginning of the novel was a tad confusing, because it talked about prior generations of the Pontifex's.  You eventually come to understand who the book is about (Ernest), but it takes a while to establish this and the reader is left wondering what they're reading.  It reminded me a lot of the beginning of 'One Hundred Years of Solitude' except that it eventually settled down and had something that resembled a plot. :)

The writing was well done and not as thick as you may expect from being written between 1873 and 1884 (published in 1903).  With the work, you have to realize that the perspective you get is largely from the eyes of Butler... and perhaps his viewpoint is a bit one-sided due to the semi-autobiographical nature, but I find that this makes the novel what it is.  You are meant to see a one-sided viewpoint, and perhaps the work is meant to teach parents the damage they can inflict on their children by not letting them grow into their own beings.  The same can be said for Victorian society and the church, which is arguably still a point of contention today.  I didn't agree with Ernest's treatment of his children, because he basically washed his hands of his responsibility.  It's hard to argue, however, that at least in the short-term that his own children would be better off with another family, because Ernest was a broken man who needed very much to focus on himself.  While this is a selfish act, I understood where he was coming from. While his children may have grown up with a loving family, I think it would lead to further problems being estranged from his 'blood' family... something that seems inevitable to me.

Read this work even if you have never heard of it before. You'll be glad you did.  Keep in mind that when purchasing this book, there are two versions.  I won't get into the distinctions, but I would look for the non-edited version... instead of the one edited by the executor, R. A. Streatfield.  The only other thing I would recommend before reading the work, is to read a brief summary on Butler's life.  He was an interesting man who translated Homer's "The Iliad" and "The Odyssey", published a critique of Shakespear's Sonnets, was a critic of Charles Darwin (despite being his friend), and became a sheep farmer in New Zealand.
Posted by Eclectic Indulgence at 9:56 PM

Email ThisBlogThis!Share to TwitterShare to FacebookShare to Pinterest
Labels: book club, book review, Samuel Butler, The Way of All Flesh

Just hopping by...hope you have a great weekend and a wonderful holiday.

Wow, thanks for the info on Butler's life, and the book! What a detailed review - you certainly put a lot of thought into it.
This is a bit out of my usual genre-fiction reading....do you think I should give it a go?

Dee,
I would give it a go - always good to break out of your confort zone. It *is* fiction, it's just based in reality... which most fiction seems to be anyway.