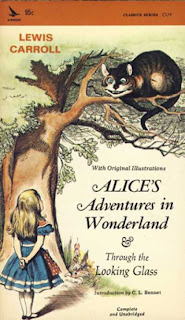 I've been a fan of the Disney film "Alice in Wonderland" since I was a child.  The story has always been very magical to me and I have certain favourites like the smoking caterpillar, the story of the walrus and the carpenter [actually in "Through the Looking Glass"], etc and I was very excited to start reading the original work.  Unfortunately, I don't have an edition with the original illustrations, but I have a nice copy from Dragon's World Ltd with some coloured illustrations by Malcolm Ashman. Overall I was pleased with the edition and the illustrations, but I long to read the original edition.

Moving on from that tangent, I was less than pleased with this book.  Maybe it has something to do with the Disney movie version I have so long admired, but I found there were parts in this book that did nothing for me... and I think Disney was correct in leaving them out.  There was a point with the Duchess who eventually turns into a pig and an episode with too much pepper, an episode with a sad turtle and a gryphon... and I just didn't feel they added much to the story.  As a whole, there were many more animal characters than in the movie and while it muddied it for me, I'm sure that some children would appreciate the diversity.  That said, it was not a novel for children to learn about animals, because they had obviously been given human traits not akin to their real nature in the wild.  This led to a further imagination for the reader, but I could see adults having to do a lot of explaining afterwords to inquisitive minds.  Perhaps this potential interaction between parents and their children is a good thing.

I'm torn a little with Carroll's wit.  Through the eyes his child protagonist, Alice, he was able to break down the meaning of things we say every day and turn them into literal meanings.  This had the effect of frustrating Alice while adding a bit of humour to the story but also a feeling of "okay, Carroll... we get it already.  Don't you think you're overdoing it a little?"

The other thing that I never realized was that through the book references to the Jabberwocky appeared quite randomly.  In 'Through the Looking Glass', the poem is listed in its entirety.

On the whole, the story was an enjoyable one.  I could not imagine my life without Carroll's stories, but I just prefer the way Disney adapted it... which is unusual given that I usually despise changes from the original.  I will post another review on "Through the Looking Glass" shortly... as my thoughts towards that work are incredibly different.
----

*Note: This pseudonym was a play on his real name; Lewis was the anglicised form of Ludovicus, which was the Latin for Lutwidge, and Carroll an Irish surname similar to the Latin name Carolus, from which the name Charles comes
+Note2: In 1931, the book was banned in Hunan, China, because "animals should not use human language" and it "puts animals and human beings on the same level". In Woodsville High School in Haverhill, New Hampshire, the story also was banned, because it had "expletives, references to masturbation and sexual fantasies, and derogatory characterizations of teachers and of religious ceremonies". -Blogger's Note: The former is hilariously absurd and I didn't see those references at all... did I miss something?  It probably has something to do with the fact that Carroll liked to paint children in the nude... but it's important to note that no cases of paedophilia were ever substantiated.
Posted by Eclectic Indulgence at 12:00 AM

I think Disney has done the book a disservice, largely in that it took a story that is not really a story for children, and made it for children. I too loved the Disney adapation (for what it was) and I enjoyed the more recent Johnny Depp version (more true to the actual story). I think a lot of the book won't work for many people who are first familiar with Disney's childrens version, because it's just so different, from plot to intent.

As to they censorship references, they're definitely on to something - but banning books is ridiculous regardless of motive.

I'll be the first to admit that, as a kid, I read this book one way and then later, in a grad study course, I read it completely different.

I read this earlier this year and enjoyed it, although I did enjoy it more as a child.

I have actually never read this one, but I will sometime in the future. I kind of take Disney's versions of things with a grain of salt and I don't doubt that the book is better.

I found you through "Page Turners" and I love your blog (I've been exploring for a few minutes). I write a blog based solely on classics so I hope you will stop in! Keep up the great reviews!

Interesting review! To be honest, I've never read this book. But from what I've heard, I think I'd love the craziness of it. I'm not sure if it would be too over the top, though!

P.S. I found out about your blog from Page Turners, and I'm a new follower!

I enjoyed the book more than I thought I would but was surprised that most of my favorite bits from the movie were in fact in through the looking glass.

I saw your feature on Page Turners and am happy to have found another blog that isn't focused on YA and chick lit - we are hard to come by :)

Doesn't mean it isn't a great read for adults as well, and obviously there are things adults will get out of it that children might not get, but I would argue that it's definitely a book for children. I'm just curious as to why he thinks it isn't?

I love what others said here, about how the book is so different (and equally ejoyable) through an adult's eyes. I by far prefer the book to the Disney adaption.