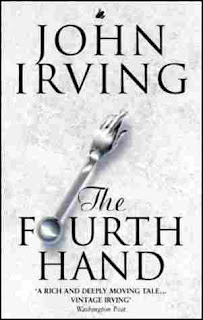 I must have known somehow about how Patrick Wallingford lost his left hand prior to my post a couple of weeks ago on the opening line from the novel.  It gets eaten by a lion.  Okay, this is not really a spoiler... you find it out in the first chapter or two which leads me to believe that I've read a portion of this book before and put it down before completion.

I'm not going to say much about this book except that it pales in comparison to both "The World According to Garp" and "A Prayer for Owen Meany", both books I absolutely loved.

This book is about Patrick Wallingford, a ladies man and a journalist that loses his hand.  The novel is really a different type of love story where Patrick finally falls in love with a women who is not just some girl who wants to sleep with him (he's basically what some term as 'easy' and just waits to be approached by women because he's so good looking).  The book was plastered with sexuality, and some would say sexual perversion.  I suppose it's up to the reader to make a judgement call on that one - I will just say that I after a while I was thinking 'okay, Irving... enough with all this sex.  I don't want to read a Harlequin romance novel."

The premise is this:  Wallingford loses his hand to a lion.  He hates his job as a journalist because journalism is not what it used to be - it's smutty.  He sleeps around with women and has only two long term relationships.  Eventually, a woman out of nowhere offers her husband's hand as a transplant.  This man, Otto, eventually gets killed (accidentally by himself in typical Irving style) and his hand is surgically attached to Wallingford.  He impregnates this woman as a 'service' for the hand and now he has a baby with a woman that he 'loves' - this woman doesn't give him the time of day... she only cares about the hand.  She replaces the love of the hand for the child she bears (and thus, the hand doesn't have a reason for living anymore and eventually 'dies').  Wallingford finally gets fired from his job and eventually gets Otto's ex-wife to agree to marry him because she wants to try to love him.  Throw in a bunch of sex and that's it in a nutshell.

I think all the sex* took away from the book, and while the love story was there and interesting (since it was atypical), the novel on the whole did very little for me.  It wasn't as funny as "A Prayer for Owen Meany" and it didn't have any strong messages that either Garp or Owen Meany had that I believe will stick with me.  The characters weren't really endearing and not a lot actually happened.  Let's just say that I wasn't impressed, and if I read another Irving novel it would probably be "The Cider House Rules" because I've heard that that's really the only other one that is a decent read.

Anyone else have opinions on Irving or this novel?

*Note: There is a good chart of Irving's reoccurring themes and sexual variations here: http://en.wikipedia.org/wiki/John_Irving

QUOTATIONS:
"...books, and sometimes movies, are more personal than that; they can be mutually appreciated, but the specific reasons for loving them cannot satisfactorily be shared." 322

"What do medical school students know about having lives?  They haven't had time to have lives." 347
Posted by Eclectic Indulgence at 12:00 AM

I'm visiting from the Hop! I've read a lot of John Irving and think his new stuff just isn't nearly as good. Cider House, Garp, Hotel New Hampshire, and Owen Meany are the greats. I think I started this book and put it down.