Sir Thomas More's "Utopia" was first published in Latin in 1515. The piece was not translated to English until 1551, and I had the fortunate (or unfortunate - depending on how you look at it) privilege of reading this first English edition. The language is rather old, which makes it a slower read, but the novel itself is only about 140 pages. It's split into two books and has a brief introduction written by the translator to one of the secretaries to the King of England.

What's quite interesting about this note, is that the translator (Ralph Robinson) states that he doesn't believe in More's view of Christianity, but insists that this work was so important that it needed to be translated into English. However, Robinson also goes on to say that he was going to give up the task of translating this text, if not for a friend of his who convinced him to continue. He states that it was for this reason alone that he continued, and if the King did not approve of the translation, he takes no responsibility for the work. What a coward - the true antithesis of what Sir Thomas More stood for.

Note that Sir Thomas More was eventually executed by order of the King of England (Henry VIII) in 1535, for not signing the "Act of Supremacy" which would have declared King Henry VIII the Supreme Head of the Church of England. With this title, the King would have been able to annul the marriage to his wife Catherine, whom he was upset with for not producing an heir to the throne. There was a great movie done on the situation entitled "A Man For All Seasons", which was produced in 1966. Sir Thomas More was played by Paul Scofield - and Orson Welles played the part of a Cardinal.

The book is written as a dialogue between More himself and Raphel Hythloday, a scholar that he is introduced to by his friend Peter Giles. The first book deals with the current state of England and touches on subjects such as theft, greed, class, materialism, chain gangs, religion and vanity. More exposes the flaws he witnesses in society, with the ultimate goal to challenge the beliefs of the men in charge of governance.

Here are some of my favourite quotes from Book One:

"...the most part of all princes have more delight in warlike matters and feats of chivalry (the knowledge whereof I neither have no desire) than in the good feats of peace, and employ much more study how by right or by wrong to enlarge their dominions, than how well and peaceable to rule and govern that they have already." 22

"For it is too extreme and cruel a punishment for theft, and yet not sufficient to refrain and withhold men from theft. For simple theft is not so great an offence that it ought to be punished with death. Neither there is any punishment so horrible that it can keep them from stealing which have no other craft whereby to get their living. Therefore in this point not you only but also the most part of the world be like evil schoolmasters, which be readier to beat than to teach their scholars. For great and horrible punishments be appointed for thieves, whereas much rather provision should have been made that there were some means whereby they might get their living, so that no man should be driven to this extreme necessity, first to steal and then to die." 24-25

"...the king ought to take more care for the wealth of his people than for his own wealth, even as the office and duty of a shepherd is, in that he is a shepherd, to feed his sheep rather than himself." 46-47

"...it is against the dignity of a king to have rule over beggars, but rather over rich and wealthy men. Of this mind was the hardy and courageous Fabricius when he said that he had rather be a ruler of rich men than be rich himself. And, verily, one man to live in pleasure and wealth while all others weep and smart for it, that is the part, not of a king, but of a jailer." 47

In book two, More outlines what Utopia (formerly called "Abraxa") is. He teaches us about the Utopia way of life and touches on many subjects including vanity, hunting, good vs. evil, right vs. wrong, moral vs. immoral, prisoners, illness, euthanasia, divorce, fidelity/marriage, homosexuality, revenge, mercenaries, sacrifice and religion. It's clearly evident that More is opening a full can of worms to make a point to the 'learned' rulers of society. He challenges their ideals and paints a picture that sounds a lot like communism - years before his time.

The novel in parts, is tremendously dated. His views on homosexuality, for example, are clearly the views popular in those times (which are not in fashion today) - but most of his views go against the grain. I particular enjoy his view on gold and how the Utopians give it to their children to play with because it has no real value. The only value the metal has is an artificial one, and something that we still believe in today. Gold is 'valued' at over $900 per ounce, and provides very little functionality. More challenges our views on such subjects and teaches us about our shallow way of living.

Here are some of my favourite quotes from Book Two:

..."take heed that no man sit idle, but that every one apply his own craft with earnest diligence; and yet for all that, not to be wearied from early in the morning to late in the evening with continual work, like labouring and toiling beasts." 66

"...to withdraw something from thyself to give to others, that is a point of humanity and gentleness, which never taketh away so much commodity as it bringeth again. For it is recompensed with the return of benefits; and the conscience of the good deed, with the remembrance of the thankful love and benevolence of them to whom thou hast done it, doth bring more pleasure to thy mind than that which thou hast withholden from thyself could have brought to thy body." 88-89

On law...
"...every man should plead his own matter, and tell the same tale before the judge that he would tell to his man of law. So shall there be less circumstance of words, and the truth shall sooner come to light, whiles the judge with a discreet judgment doth weigh the words of him whom no lawyer hath instruct with deceit, and whiles he helpeth and beareth out simple wits against the false and malicious circumventions of crafty children." 106

"...no man shall be blamed for reasoning in the maintenance of his own religion." 121

"For what can be more rich than to live joyfully and merrily, without all grief and pensiveness, not caring for his own living, nor vexed or troubled with his wife's importunate complaints, nor dreading poverty to his son, nor sorrowing for his daughter's dowry?" 133

"I can perceive nothing but a certain conspiracy of rich men procuring their own commodities under the name and title of the commonwealth." 135

On Pride...
"She measureth not wealth and prosperity by her own commodities, but by the misery and incommodities of other." 136

At the end of the novel, More sticks in the last dagger as a challenge - that he wishes for some of these concepts to stick in current English society, but he's smart enough not to hope for something he doesn't think will ever happen.

In conclusion, this book was a very interesting read, especially if you understand some of the history behind More and his feelings towards integrity, honour and doing the 'right' things in life. The book clearly had an effect on society, and still does challenge the thinking of people, even in the present day. It was not only bold and instrumental during the 1500's, but it's bold now - and shows us how little progression we have made, in a society that claims to be focused on 'growth'. It's too bad no one ever took the time to think about the word. 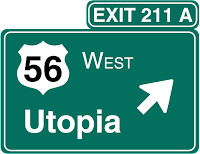 Posted by Eclectic Indulgence at 7:37 PM