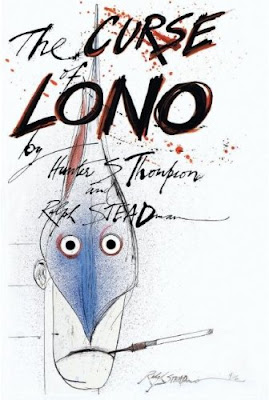 Most people either really enjoy Hunter S. Thompson or think everything that he stands for is a complete showmanship scam.  Those that enjoyed his work "Fear and Loathing in Las Vegas" will enjoy yet another great work of "Gonzo Journalism".  While "Fear and Loathing in Las Vegas" was labeled as a work of fiction, this novel seems to be classified by some (at least on Wikipedia) as non-fiction.  It's another book where the lines between reality and fiction are blurred... typical of Gonzo style.

The book is about Hunter S. Thompson being commissioned to follow the 1980 Honolulu Marathon for a magazine called "Running."  He meets his friend Ralph Steadman there, who flies to Hawaii with his family [Note: Steadman is the famous English artist that is responsible for most of the illustrations in Thompson's work, including the illustrated copy of "The Curse of Lono"].  Before he arrives in Hawaii, he meets an obscure character on the plane and we're introduced to him right away with yet another great opening line to a novel by Thompson:


"We were about forty minutes out of San Francisco when the crew finally decided to take action on the problem in Lavatory 1B."
If that doesn't get you interested, then nothing will.  It's indicative of the type of beginning that we saw in Fear and Loathing:

"We were somewhere around Barstow on the edge of the desert when the drugs began to take hold. I remember saying something like 'I feel a bit lightheaded; maybe you should drive . . .' And suddenly there was a terrible roar all around us and the sky was full of what looked like huge bats, all swooping and screeching and diving around the car, which was going about a hundred miles an hour with the top down to Las Vegas. And a voice was screaming, 'Holy Jesus! What are these goddamn animals?'"

But I digress.  After the marathon is 'covered', the story evolves (or devolves depending on your point of view) into a curious story about Thompson's time in Hawaii.  Throughout the work, there are snippets about Captain James Cook who was said to be the reincarnation of a Polynesian God named Lono.  As the story of Thompson plays out, snippets from a historical text are inserted throughout the story.  You're not quite sure why until the ending, when Thompson states that he is the next reincarnation of the God Lono. 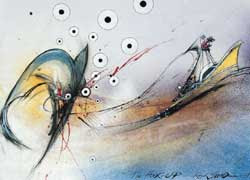 As expected, the work is full of Thompson humour and drug induced visions.  It also contains letters from Thompson to Steadman (in Gonzo style - we're not sure if these are true or not) which help the story along.  All in all, this work is a must have for Thompson enthusiasts.  It's a bit hard to find [since it's out of print], especially the beautifully illustrated Taschen 2005 over sized version, but if you can get your hands on one you should do so.  I was offered $200 for mine and could not part with it after reading it, because the novel and illustrations were such a work of art.
The Folio Society has put out a nice version of Cook's travels, and I wouldn't mind getting my hands on one after reading this work.  His story is interesting in itself, and the historical account of his death from the hands of natives was fascinating, though gruesome.
Posted by Eclectic Indulgence at 7:57 PM