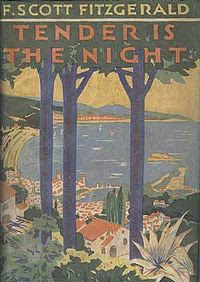 This novel is digested much better with a bit of background, and since I'm hosting the book club this week I kind of have to do it anyway.  Fitzgerald wrote 4 novels [and a ton of short stories] over the course of his life, with the fifth being unfinished and published posthumously.

I like to look at the years that the books were published, to see how much time it takes to complete a work and get a sense of what's happening in the time period.  The book was written pre-WWII, but right in the middle of the Great Depression which started in 1929 and ended in the mid thirties.

[SPOILERS BELOW]
The book chronicled the lives of Dick and Nicole Diver, who purchase a villa in the French Riviera some time after their marriage.  The couple meets a bunch of Americans on the beach, including Rosemary, an 18 year old actress.  Rosemary falls in love with Dick and Dick reciprocates this affection, despite being twice her age.  This occurs in the first part of three parts of the novel.  The second part deals with how Dick and Nicole met.  Nicole was abused by her father and was sent to a psychiatric ward.  She had met Dick on a previous occurrence and fell in love with him.  During her recovery, Dick and Nicole sent mail back and forth and eventually, after she made it out of the clinic, they wed.  There is a lot of talk in the novel about if Dick married for love or for science, but in my opinion, it was love and just devolved into science.  Dick is a psychiatrist, and after he gets married he goes through a stint of unemployment after a failed clinic in Switzerland.

The third part takes us back to the present.  Dick meets Rosemary again four years later and they consummate their love.  It happens to be a one time thing though, as Rosemary is not the same in Dick's head as in reality.  Meanwhile, Nicole chooses Tommy, a friend, as an outlet for her life... and they end up cheating in a motel.  Tommy falls in love with her (I'm not sure the feeling is reciprocal) and Nicole leaves Dick.  Dick wanders alone aimlessly, in and out of employment... battling his own personal demons.

[SPOILERS END]
Like a ton of good 'fiction', this novel is partly autobiographical.  Fitzgerald's wife Zelda was diagnosed with schizophrenia in 1932.  Fitzgerald rented an estate ('la Paix') on the most expensive street in Paris.  He ran out of money several times, according to Wikipedia, and had to borrow money several times to complete the work.

The book deals with the concept of love.  There is a point in the novel (~pg 336) where it states that Dick just wanted to be loved.  I sympathize with this part of Diver's character... because I understand how it can jumble you up inside.  Nick tried to stick with his morals, but he fell out of love with Nicole and then resented the state of affairs that his life had amounted to.  Nicole was doomed from the start, and it's really a wonder she did as well as she did despite being abused as a child.  Rosemary never seemed to grow up.  The characters, as some critics state, are not well-described but I believe you get a sense for who they are... unless they're kind of frivolous characters which are alluded to briefly and can get jumbled up in your memory due to the lack of descriptions (if I recall correctly, this is the same as in "The Great Gatsby").

Fitzgerald uses some beautiful prose throughout the work, and despite not being memorable quotations, they are just beautifully crafted sentences.  In addition, there was some good humour used including a piece about a psychiatrist spending years of his life working on the complexities of something so minor (an armadillo's brain) just so he could do something 'different', only to find out that someone was doing the same thing in another part of the world.  The humour is sparse and subtle, but made me smile at times.

There were a couple of murders in this book, and they really weren't explained well and had virtually no ramifications on the book.  One broke up a possible episode between Dick and Rosemary, but the situation was never explained.  I'm sure that Fitzgerald had a reason for it, but it took away from the focus of the book, in my opinion.

On the whole, the book didn't impress me that much, but it's something that I think will benefit from a good book club discussion.  I've read some lovely reviews from Amazon that made me feel as if I should have fallen in love with the book, but I really just fell in love with the review.  On the whole, I enjoyed the story but didn't ever feel like I was really into it.  I wanted to be, but I felt that this Fitzgerald work was the least enjoyable and memorable of the three I have currently read.


Some Interesting Notes:
The novel is ranked 28th on the Modern Library's List of 100 Best Novels of the 20th Century.

The title "Tender is the Night" is a line from a poem from John Keats wrote in 1819 called "Ode to a Nightingale":

tender is the night,
And haply the Queen-Moon is on her throne,
Cluster’d around by all her starry Fays;
But here there is no light,
Save what from heaven is with the breezes blown
Through verdurous glooms and winding mossy ways. (lines 35–40)

From Wikipedia: "Two versions of this novel are in print. The first version, published in 1934, uses flashbacks whilst the second revised version, prepared by Fitzgerald's friend and noted critic Malcolm Cowley on the basis of notes for a revision left by Fitzgerald, is ordered chronologically; this version was first published posthumously in 1951. Critics have suggested that Cowley's revision was undertaken due to negative reviews of the temporal structure of the book on its first release."
Posted by Eclectic Indulgence at 7:00 PM

I read Tender is the Night five or six years ago for a classics book club I was a part of. I think I was the only person that liked the book. I enjoyed the lyrical prose and how it was seemingly autobiographical at times. I still think The Great Gatsby is Fitzgerald's masterpiece and Tender is the Night does not hold a candle to it.

I think "The Last Tycoon" may have eclipsed "The Great Gatsby" if it was finished. It was that good - would strongly recommend it.

Any other Fitzgerald that you would recommend?