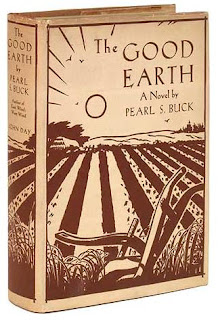 The Plot & The Context
The Good Earth is about a rural Chinese family centred around Wang Lung, a local farmer.  The book depicts life on a small piece of land, the trials and tribulations of poverty and also of success.
I imagine that in 1931, Westerns knew much less about China than we do today - even those of us (myself included) that are largely ignorant to their way of life and culture of their society.  However, in today's age, this book does very little to teach me anything I don't know and the historical backdrop in which the novel is presented is hazy at best.
The novel doesn't delve much into what is happening with wars in China; perhaps this is to keep us as ignorant as the Wang family in such matters.  This seems to be the antithesis of the scope of 'War and Peace' - which Tolstoy chronicled to such lengths to show us in macro what was going on in Russia.  Buck chronicles the life of Wang family in macro (centred around Lung) but barely skims the surface of the rest of China.
The book reaffirms the importance of a social hierarchy in Chinese culture, as well as familial structure.  It discusses at length the existence of concubines, slaves and arranged marriages.  It details the struggles of life - which do not get easier as one becomes richer.  It discusses poverty, superstition, religion (only lightly), drug use, mental retardation, and infanticide all within the Wang family.  The familial scope is vast, but that's really as far as this book goes.
The Title
The land was the most important thing in Wang Lung's life at first, but eventually it became mixed with living a peaceful existence.  The only peaceful existence he seemed to have was in poverty - and frankly, being alone in the fields.  If Wang Lung would have decided to become a hermit, I'm sure he would have been able to live the peaceful existence that he wanted - each relationship he had seemed to bring out the evil in him, other than the relationship with the land.  While he struggled in his life to become wealthy and respected, his very essence and charm escaped him.
The Point
What I take away from this is similar to that of of Voltaire's "Candide" - the secret to life is to self-sustain on a farm and only through life's journey can one figure this out.  While Candide came to this conclusion at the end of the novel, Wang Lung had a difficult time focusing on what was really important in his life and instead seemed to just go through life like checking off items on a 'to do' list - things that he thought he needed to do for his family and his family name.
The Prose
There are no memorable quotations, the language is far from beautiful and the prose is only so-so. While this book was the best selling novel in 1931 and 1932 in the United States, I find that it loses something in today's time - dissimilar to many of the classics that I generally read.
The Final Judgement
I don't regret reading this novel, but I must say that I did not get very much out of it. The prose was easy to read, the characters were interesting (it was easy to like O-Lan and dislike 'Wang Lung' for me) and I would wager that I take very little from this book over the course of my life.
Posted by Eclectic Indulgence at 4:59 PM

I was forced to read this book my freshman year of college, primarily because the all-girls' college I attended (then Randolph Macon Woman's College, now the co-ed Randolph College) boasts Pearl S. Buck as its most famous alumna. I was also unimpressed with the book (AND had to write a 20 page paper about it) so don't feel bad. :)

I adored this book. I'm always trying to push it off on other people.

I'm stopping by via the Hop. I always follow back.

Also, I wanted to let you know that I am having a wonderful giveaway this month at my blog, Readerbuzz I'm giving away a lovely hardback copy of Anna and the French Kiss! Hope you will stop by.

I really liked this book....it is one of the choices for this month's book club.

We actually will be meeting and discussing it this afternoon.

Teachers have good discussions. :) :) Looking forward to seeing what they will say.

I Love this book - very practical, explaining the continuity of life as a stream of water running through without any interruption.

I love it too...great way to learn about different cultures.