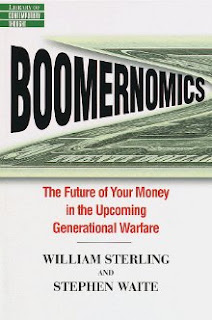 What possesses someone to read a book on business written back in 1997, more than 13 years ago?  I can't tell you the answer to this because I doubt anyone else is reading this book except for me and one other review I read from this year.  When I looked at Amazon.ca, it was ranked #823,376 in Books... so that tells you how popular this book is.  I found the book in my condo library (where it will go back now that I'm done), so I figured this would also be a good book to read in Cuba.  I'm not sure why I thought that reading an old business book suited a tropical locale, but it turned out to be a decent book to read by the pool.

I was still in high school when this book came out and had no understanding of what was going on in the world at the time.  The concept of the 'boomers' was probably a pretty new phenomenon at least in the economic world.  The most popular book that I heard bandied about on the subject was 'Boom, Bust and Echo' which I never read... but I'm sure I got the basic gist of it through my four years of business school.

So the question is... why would *I* read a book from 1997 about business?  The answer is two fold:
1) I didn't know what was going on in the world when I was in high school and
2) I wanted to see how well these economists did!

I think I got a decent picture of what was happening in 1997, at least from a high level perspective.  What I didn't anticipate that I would learn coming out of reading the work was a deeper interest in some of the United States policies that I had always heard about, but never delved into.  The book dealt a lot about pensions as well as healthcare; I learned about Social Security, Medicare, Medicaid and the arguments for a private system.  While President Obama has put together a new healthcare system, he is strongly against the privatization of Social Security and Medicare (he advocates increasing taxes, and may have to up the retirement age in the states... similar to what is going on in France right now).  For those north of the border, these concepts are similar to our CPP and Old Age Security.

Anyway, the concept that really stuck out with me was 'Generational Accounting' which basically states that Americans are sacrificing their future generation's wealth by going into so much debt and not being able to pay for American boomers when they retire.  This is still true today, and Waite and Sterling actually call Social Security a 'pyramid scheme' and in my opinion, they make a really good point.  If the people who join the system late never get any benefits from the system but end up still paying into it, isn't that a pyramid scheme?  While Wikipedia is not the ultimate source of information, it does give some interesting graphs on the valuation of such programs, when they will run out of money, etc.

Now, getting into the results.  The authors of the book were pretty accurate in what would happen to the United States economy.  They predicted a crash in the stock market by 2010 (not too far off), which they termed 'the Big Chill'.  They also predicted globalization and technology being the two most important factors along with demographics as shaping the American economy.  I think they underestimated globalization and overemphasized the strength of the American economy, though they did talk about emerging markets having a large effect in the future.  There was no mention of the effect of such countries as China and India... and as a friend of mine states, 'the other big one' ...namely, Brazil.  I found it comical that the authors talked about the United States leading in technology and positioned to do so in the future.  Depending on your vantage point, you could argue this is still the case... but most components are produced in countries like China and Japan... and I wouldn't state that the United States is the leading the charge. I suppose this is a matter of opinion.

Anyway, back to the boomers.  The main concept of the book was around this quote which I found on page 140: "...the basic rule of boomernomic investing - get there before the boomers."  This concept was interesting and I suppose it would be truer in a less global economy, which is what made me think that the authors underestimated globalization.  The boomers in North America have an effect on the economy in the United States, but there are so many other global factors now that the boomers aren't as integral as they once were to the U.S.A.  I think this is why the topic is not discussed more often now-a-days.  In today's world, were more concerned about countries going bankrupt (Iceland, Greece) and perhaps Ireland, Spain, Portugal, Italy, etc.  I suppose that's a bigger factor now-a-days then the boomers.  Even most Americans would have to admit that.  :)
Posted by Eclectic Indulgence at 8:35 PM