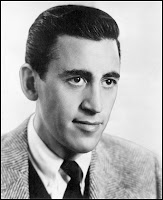 This book is not really about being a recluse, but details the life of Seymour Glass from his brother's perspective. "Seymour, An Introduction" is Salinger's last work and appears to be written for the sake of getting it all out. It lacks direction and purpose, and is as eccentric as Salinger himself.


For those in search of Salinger, this story seems to full of what he calls "delicious lies." My opinion of the story, is that it lacked truth. Salinger has gone to great lengths to let you believe this is truth, but in short, this story just adds to the Salinger mystery. By the end, I had no idea what to think anymore.
Salinger acknowledges that this book is for him and him alone, which I find evident. While some may garner a point from this story, I must admit that if there is one, it has gone over my head.
I only wrote down one quote, so here it is...
"When Seymour was twenty-one, a nearly full professor of English, and had already been teaching for two years, I asked him what, if anything, got him down about teaching. He said he didn't think that anything about it got him exactly down, but there was one thing, he thought, that frightened him: reading the pencilled notations in the margins of books in the colledge library." 168
Posted by Eclectic Indulgence at 10:19 PM