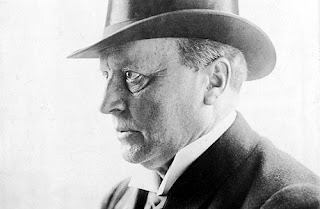 It's Friday, and you know what that means... it's time for book beginnings!  This week's opening line comes from Henry James' work "Washington Square" which I'm reading for February's book club meeting.

During a portion of the first half of the present century, and more particularly during the latter part of it, there flourished and practised in the city of New York a physician who enjoyed perhaps an exceptional share of the consideration which, in the United States, has always been bestowed upon distinguished members of the medical profession.

Okay, so I know there are going to be a ton of run on sentences right off the bat.  And it appears that the setting is in New York between 1800 and 1850 and a 'distinguished' physician is most likely the main character.  We also know, which Washington Square is being referred to... since there are many cities that have a square named exactly thus.

Books from this time period, I find, frequently set the scene within the first sentence and it appears this work is no different.  It doesn't thrill me, but it definitely prepares me for what is coming and gives me a primary impression that Henry James is a very structured writer.

Your thoughts?
Posted by Eclectic Indulgence at 12:00 AM

Talk about a first sentence that packs a punch. Henry James intimidates me (I can get lost in that first sentence alone), but I intend to start with at least one of his short stories this year. I can't wait to see what you think of the whole book. :)

Hi! just stopping by via the hop. Thought I'd say hello :)

I like your blog and am your newest follower!

Rachel
And the plot thickens...

I've actually read this one. Henry James is tough going for me (so "wordy"), but I made it through this one and liked it well enough.

There is a movie adaptation (starring Jennifer Jason Leigh of all people as the daughter) that was making the rounds on the digital cable channels a few months ago. It actually wasn't that bad.

Other Henry James I've read:
Daisy Miller
The Aspern Papers
The Turn of the Screw

Probably the last was my favorite, but also the unconventional The Aspern Papers made a big impression on me for some reason. I suspect it was one of the cases where "the right book at the right time" just comes along.

Henry James is one of my favorite writers. I read everyting I can get my hands on that he wrote. His writing is elegance in letters. Very nice blog. I'm now following you.
http://sharonhenning.blogspot.com

Hm. I must say that is not a first sentence that would draw me in. Luckily James has a lot to recommend him otherwise!

Thinking about first sentences is such an interesting exercise. Some are so powerful in our culture--from "Call me Ishmael" to "It was the best of times, it was the worst of times." I'm trying to pay more attention now to how books start--and how successful that start might be.

Hi! I received a "Stylish Bloggers Award" and I'm passing it on to you.
Check back to my blog to see how you can pass it on and receive the logo.
I chose your blog because I enjoy reading it and think others should too.
Happy blogging!

Henry James “Washington Square” tells the story of a handsome, intelligent, and irresponsible man, Morris Townsend, and his courtship of the average looking and relatively unintelligent Catherine Sloper. This courtship is blatantly self serving: Catherine stands to inherit her fathers fortune, which in today’s currency would be valued millions of dollars, and Morris—unemployed, idle, and self-centred—wants to marry Catherine so that he could obtain economic security and comfort. Catherine, either because of her naivety or the fact that her attraction to Morris has rendered her unable to see the truth, is blithely ignorant of Morris’s real motives. But Catherine’s father, the redoubtable, brilliant, stoic, and formidable doctor, sees right through Morris, and tries to prevent their engagement coming to fruition. He ultimately succeeds in preventing the marriage, but the tragic affair leaves permanent scars in poor Catherine.
As the above suggests, the villain in this affair is Morris, whose desire for economic security and comfort leads him to treat Catherine like an object, a means for his own selfish ends. Because of the accident of birth which endowed him with good looks, Morris believes himself to be entitled to wealth and happiness without the hard work that obtaining these things normally requires. This sense of entitlement overrides any humane concern about the devastating consequences that his actions have on the poor Catherine, who naively believes that Morris’s “eyes convey a love that is pure and true.”
But it is not only Morris’s actions which devastate Catherine. His partner in crime is the latter’s aunt, Ms. Penniman, who is Dr. Sloper’s sister and who lives with her brother and her niece. Ms. Penniman totally ignores her duty to protect her niece by encouraging Morris to pursue the relationship and by misleading Catherine into believing that Morris’s motives are pure. Why does she do this? For several reasons. First, because she is attracted to Morris, and her self described role as the promoter of Catherine’s marriage gives her an excuse to meet Morris regularly in a secretive fashion. These meetings were ostensibly about Catherine, but in fact they were about Ms. Penniman’s wish to fulfill her salacious desires for Morris. Second, her antipathy towards her brother, Dr. Sloper, finds expression in her wish for Morris to succeed in obtaining the good doctor’s fortune through his marriage with Catherine.
The true hero in the book is Dr. Sloper. He is a dedicated physician who is dedicated to the well being of Catherine. He is brilliant and prescient; his first meeting with Morris gives him the suspicion that beneath the surface this smart and good looking young man is in fact scheming, irresponsible, and utterly selfish. And he daftly manipulates the situation to ensure that the true Morris, not the Morris perceived by Catherine, would show itself. And it does, which ultimately leads to the end of their engagement.
There are some passages in the book that suggest that Dr. Sloper is a cold hearted, cruel man. There are his frank observations, when speaking to Ms. Almond, about the unattractiveness and lack of intelligence of his daughter. But the doctor was not being mean here; he was simply being honest. And this honesty is part of a package of traits that ensures that the doctor sees reality the way it is, not the way one wishes it to be. Second, there are scenes when the doctor expresses enjoyment about his capacity to manipulate the relationship between Catherine and Morris to ensure that their marriage does not take place. This reflects the admittedly perverse satisfaction that accrues to people like Dr. Sloper who relish challenges and difficulties that need to be resolved through stratagem and manipulation. That he enjoyed these manipulations may be perverted, but the more important thing to consider is that he succeeded in preventing the meretricious Morris from destroying Catherine’s life.