In Praise of Reading and Fiction 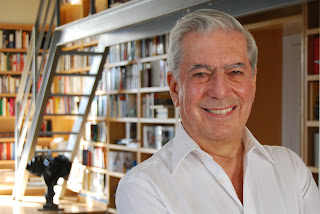 I don't usually post anything outside of the beginning lines of a novel, some of the intriguing vocabulary of a work or a review itself, but I felt like I should make a post on this, an article written by Mario Vargas Llosa, the 2010 Nobel Prize winner in the Literature field.

Quotes I enjoyed:
"Flaubert taught me that talent is unyielding discipline and long patience. Faulkner, that form – writing and structure – elevates or impoverishes subjects. Martorell, Cervantes, Dickens, Balzac, Tolstoy, Conrad, Thomas Mann, that scope and ambition are as important in a novel as stylistic dexterity and narrative strategy. Sartre, that words are acts, that a novel, a play, or an essay, engaged with the present moment and better options, can change the course of history. Camus and Orwell, that a literature stripped of morality is inhuman, and Malraux that heroism and the epic are as possible in the present as is the time of the Argonauts, the Odyssey, and the Iliad.


If in this address I were to summon all the writers to whom I owe a few things or a great deal, their shadows would plunge us into darkness. They are innumerable. In addition to revealing the secrets of the storytelling craft, they obliged me to explore the bottomless depths of humanity, admire its heroic deeds, and feel horror at its savagery. They were my most obliging friends, the ones who vitalized my calling and in whose books I discovered that there is hope even in the worst of circumstances, that living is worth the effort if only because without life we could not read or imagine stories."

"We would be worse than we are without the good books we have read, more conformist, not as restless, more submissive, and the critical spirit, the engine of progress, would not even exist. Like writing, reading is a protest against the insufficiencies of life. When we look in fiction for what is missing in life, we are saying, with no need to say it or even to know it, that life as it is does not satisfy our thirst for the absolute – the foundation of the human condition – and should be better. We invent fictions in order to live somehow the many lives we would like to lead when we barely have one at our disposal.


Without fictions we would be less aware of the importance of freedom for life to be livable, the hell it turns into when it is trampled underfoot by a tyrant, an ideology, or a religion. Let those who doubt that literature not only submerges us in the dream of beauty and happiness but alerts us to every kind of oppression, ask themselves why all regimes determined to control the behavior of citizens from cradle to grave fear it so much they establish systems of censorship to repress it and keep so wary an eye on independent writers. They do this because they know the risk of allowing the imagination to wander free in books, know how seditious fictions become when the reader compares the freedom that makes them possible and is exercised in them with the obscurantism and fear lying in wait in the real world. Whether they want it or not, know it or not, when they invent stories the writers of tales propagate dissatisfaction, demonstrating that the world is badly made and the life of fantasy richer than the life of our daily routine. This fact, if it takes root in their sensibility and consciousness, makes citizens more difficult to manipulate, less willing to accept the lies of the interrogators and jailers who would like to make them believe that behind bars they lead more secure and better lives."

"the Spanish transition from dictatorship to democracy has been one of the best stories of modern times, an example of how, when good sense and reason prevail and political adversaries set aside sectarianism for the common good, events can occur as marvelous as the ones in novels of magic realism."

"Homeland is not flags, anthems, or apodictic speeches about emblematic heroes, but a handful of places and people that populate our memories and tinge them with melancholy, the warm sensation that no matter where we are, there is a home for us to return to."

"Literature is a false representation of life that nevertheless helps us to understand life better, to orient ourselves in the labyrinth where we are born, pass by, and die."

"fiction is more than an entertainment, more than an intellectual exercise that sharpens one’s sensibility and awakens a critical spirit. It is an absolute necessity so that civilization continues to exist, renewing and preserving in us the best of what is human. "

"a world without literature would be a world without desires or ideals or irreverence, a world of automatons deprived of what makes the human being really human: the capacity to move out of oneself and into another, into others, modeled with the clay of our dreams."

"The lies of literature become truths through us, the readers transformed, infected with longings and, through the fault of fiction, permanently questioning a mediocre reality."

"we have to continue dreaming, reading, and writing, the most effective way we have found to alleviate our mortal condition, to defeat the corrosion of time, and to transform the impossible into possibility."
Posted by Eclectic Indulgence at 3:49 PM

Thanks for sharing, I will definitely read the entire article. He seems like a fascinating author - one of those authors for me that you alway intend to read but never actually do. I should change that.

This is awesome. Thanks for posting about it. I love the quotes you included - especially the one that begins "Without fictions we would be less aware of the importance of freedom for life to be livable..."
That one spoke to me very personally.

I'm off to read the article now.