This week, the blog underwent a much needed face lift.  The logo has been changed, thanks to some hard work by a very talented advertising/brand specialist [THANK YOU H!].  The design features the word 'Eclectic' in an ancient Greek font with the word 'Indulgence' sprawled underneath in a whimsy cursive style.  The ancient Greek font is meant to portray my belief that all literature is anchored in the Greek classics, and much about my current knowledge of literature and society has been influenced by this time period.

Indulgence is a word that supports the notion that I'm blessed to be able to have the time to delve or indulge in my passion for the written word.  It's written in a personalized cursive font to show that while reading classic literature is not a necessity to life, it's still a worthwhile pursuit which brings me and those I have met in the book blogging community, a great pleasure and fulfillment.

You'll notice that at the very bottom of the web page there is an image which pairs the 'E' from 'Eclectic' and the 'I' from 'Indulgence' - a button or stamp that is a small symbol for what this site represents [a pairing of the Greek with sum symbol or 'E' and the whimsical 'I'].

In addition to the logo changes, the blog has also undergone a transformation.  You'll notice that there is no longer a background image and this is because it seems to make scrolling on the web page laboured and choppy.  I've also removed all ads, because I decided that there is no need to submit visitors [or myself] to ads in an already insanely advertised western world.  I haven't seen a lick of money over the 7 years this blog has been in operation and that doesn't bother me in the slightest, as this pursuit has never been about money.

I've also removed a ton of gadgets for faster processing, and tried to make all the reviews very visible in the top left frame.  The right frame consists of ways to follow the blog and myself [twitter, goodreads, etc] and still has a listing of my upcoming reads in the next few months.

The layout itself is very simple and due to the logo change, the background is now white to match.  Each part of the blog is now encapsulated in a shadow box, which reminds me of those fondue plates which have specialized compartmental areas.  It's a bit more structured, but I find that it's aesthetically pleasing and makes the blog look less plain against the white background.

Would be curious to know what you think of the changes or if you have any suggestions for improvements. 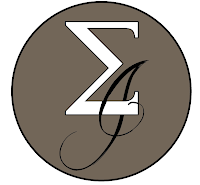 Posted by Eclectic Indulgence at 4:53 PM

The new look is great--I love the logo and the smaller button at the bottom. Nice work.

I like the new layout a lot! It's easy to read and the page loads quickly.

Looking forward to your review of The Aeneid; it's also on my reading list for this year.

I love it! It looks great. I especially love the stamp.

Thanks for all of the positive feedback!

I'm glad that everyone seems to like the new look!

I'm late weighing in, but I like the new look. I thought that the 'crooked "E" ' was a sigma, though, and epsilon looks like our "E" (I have to admit this is based of my memory of the letters on the Kappa Sigma house down the street when I was in college, though.)
-Jay

I'm awarding you with The Sunshine Blog Award.

Check out the details here; http://vsudia.wordpress.com/2012/04/11/sunshine-blog-award/