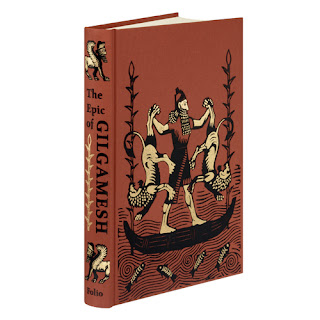 I want to apologize for the hiatus from the blog for the last six months or so.  I haven't mentioned this on the site, but in July I went traveling around Europe for nearly six months.  Over 20 countries later, I'm back in Canada... at least for now.

I managed to read a decent amount despite my globetrotting.  I'll try to write up some quick accounts of the books, but to be honest, there has been a lot in my mind that books have had to compete with.  I've had some dedicated time with two books this month, so I'll start out by reviewing them both.

I have been thinking a lot about re-focusing my reading.  I feel as if there are some glaring holes in my reading background - namely ancient epic works and the Bible.  I don't want to delve into religion here, but I do want to read as much of the Bible as possible in order to understand some references that I feel have been going over my head when reading the classics.

The Epic of Gilgamesh is an epic poem, written around the 18th century BC, and is one of the first known works of literature/poetry in the world.  It was written on clay tablets - the central epic story being contained on 12 of them, with other tablets found in different areas of the world used to fill in gaps on the main tablets (due to illegibility).  The Folio Society edition, translated by Andrew George, contains a "standard version" of the Epic which is entitled "He Who Saw the Deep" which is supplemented from material found in other fragments of the other tablets found.  In addition, these supplementary tablets are contained in their translated entirety - adding about double the Gilgamesh of other translations.  I would caution, based solely on one perusal of Wikipedia, as being cautious about the Stephen Mitchel translation: "Stephen Mitchell in 2004 supplied a controversial translation that takes many liberties with the text and includes modernized allusions and commentary relating to the Iraq war of 2003."  I haven't done any further research into this, but I was glad to be reading a seemingly superb translation by Andrew George.
﻿﻿﻿
The Epic of Gilgamesh is a work that must be read - period.  It shows you where many stories from the Bible probably come from, including the great flood and the story of Adam and Eve.  There are many small references, including fairly evocative snake shenanigans (sound familiar?)!  In addition, the concepts of the heavens and the underworld coupled with many different Gods, shows the influence Mesopotamia had on Greek culture... eventually giving rise to such greats as Homer.  In addition, the work has the ability to put present day life into context.  Gilgamesh's struggles with mourning, mortality, female relations, friendship, etc... all serve to put into perspective our own struggles.  There are many current hardships that we face, that have been a constant with humanity for over four thousand years; there is evidence of this contained in Gilgamesh and there comfort in this, somehow.

﻿﻿What surprised me, is that ignoring the religious, cultural and humanity significances... this epic is also a great story.  I did not ever want to put it down.  Many ancient texts seemingly lack readability and my assumption was that this work would be the worst of the lot, but this could not be further from the truth.  Despite the fact that there are still many holes in the work due to illegible tablets, the story flowed beautifully.  Note that you will have to get used to the style by which the epic is presented.  In my translation, there are quite a few repeats of information... but if you have a shady memory like my own, it will serve to solidify the text.  Those of you who have read Homer will see parallels in this repeating method of storytelling.

I'm not going to include any spoilers in this review.  I suggest that if anything in this post intrigues you, go pick up a good translation of this work and give it a go one afternoon.  It's less than 100 pages and I think you'll be as impressed as I was - especially if you are a fan of the Ancient Greeks or appreciate the stories of the Bible at any level.
Posted by Eclectic Indulgence at 12:29 PM