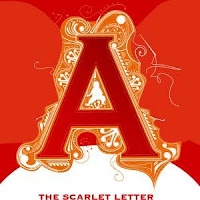 The Scarlet Letter is the story of Hester Prynne, a woman that commits adultery and is brandished with a red letter A - as a warning to others of the sin she committed.  She is publicly ridiculed and despite this, refuses to give up the identity of the male culprit.  Pearl, Hester Prynne's daughter, is also a constant reminder to Hester of her sin... and the child is credited with many spiritual qualities, both angelic and demonic.

Hawthorne reminds me of a poor man's Thomas Hardy.  He has thought out the plot, spirituality, an ostracizing from society, redemption, etc of this book very well - the story itself is a marvel.  However, the prose is far from Hardy standards and of course, the work does not have the typical Hardy tragic ending.  However, the carefully woven plot is indicative of Hardy with the exception that it doesn't seem to be as complex a web.  The work is brilliant in it's own right, but feels amateur when compared to some of the other greats of Hawethorne's time.

I enjoyed reading the story of Hester - she was a lovable character that you couldn't help but root for.  The innocence, depth and devilishness of Pearl was written beautifully and it made you love her and feel creeped out by her at the same time.  Her presence lingers on you well after you read about her and I haven't felt this way about a character since nearly a year ago, when I read Jack London's The Sea-Wolf.

While the conclusion was not quite expected, I found myself predicting much of the plot elements - indicative of a slight formulaic approach to writing.  The story itself is one that will stick with you, and I believe that when coupled with the carefully woven plot, the work is justly considered a classic.  I wouldn't classify it as one of the top 50 of all-time, but I'm glad that I read it... I enjoyed the story and it taught me both positive and negative aspects of writing.


“An effect – which I believe to be observable, more or less, in every individual who has occupied the position – is, that, while he leans on the mighty arm of the Republic, his own proper strength departs from him.  He loses, in an extent proportioned to the weakness or force of his original nature, the capability of self-support. If he possesses an unusual share of native energy, or the enervating magic of place do not operate too long upon him, his forfeited powers may be redeemable.  The ejected officer – fortunate in the unkindly shove that sends him forth betimes to struggle amid a struggling world – may return to himself, and become all that he has ever been.  But this seldom happens.  He usually keeps his ground just long enough for his own ruin, and is then thrust out, with sinews all unstrung, to totter along the difficult footpath of life as he best may.” 42


“…there has never been, for me, the genial atmosphere which a literary man requires, in order to ripen the best harvest of his mind.  I shall do better amongst other faces; and these familiar ones, it need hardly be said, will do just as well without me.” 49


“There was a remarkable intelligence in his features, as of a person who had so cultivated his mental part that it could not fail to mold the physical to itself, and become manifest by unmistakable tokens.” 65


“’…up to that epoch of my life, I had lived in vain.  The world had been so cheerless!  My heart was a habitation large enough for many guests, but lonely and chill, and without a household fire.  I longed to kindle one! It seemed not so wild a dream – old as I was, and somber as I was, and misshapen as I was – that the simple bliss, which is scattered far and wide, for all mankind to gather up, might yet be mine.  And so, Hester, I drew thee into my heart, into its innermost chamber, and sought to warm thee by the warmth which thy presence made there!’” 81


“Love, whether newly born or aroused from a deathlike slumber, must always create a sunshine, filling the heart so full of radiance that it overflows upon the outward world.” 224


“No man, for any considerable period, can wear one face to himself and another to the multitude, without finally getting bewildered as to which may be the true.” 237


“It is a curious subject of observation and inquiry, whether hatred and love be not the same thing at the bottom.  Each, in its utmost development, supposes a high degree of intimacy and heart knowledge; each renders one individual dependent for the food of his affections and spiritual life upon another; each leaves the passionate lover, or the no less passionate hater, forlorn and desolate by the withdrawal of his subject.  Philosophically considered, therefore, the two passions seem essentially the same, except that one happens to be seen in a celestial radiance, and the other in a dusky and lurid glow.” 286
Posted by Eclectic Indulgence at 1:03 PM