Through the Looking Glass | Lewis Carroll 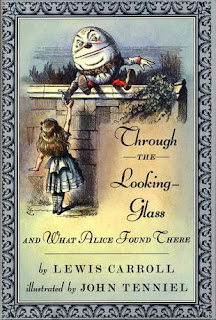 Publication Date: 1871
Author's Nationality: English
Author's Real Name: Charles Lutwidge Dodgson
Original Language: English
Genre: Classics (children's literature)
Pages: 121
I was not expecting this sequel to be better than the novel before it, but that's exactly how I felt and I believe it had something to do with having some sort of structure.  Alice walks through the looking-glass to a world on the other side and finds herself in a real life chess game.  The storytelling was original and I found myself seeing the pieces on a chessboard come alive and interact.  The Queens in the story move so fast, and if you think about it... this makes perfect sense.  There is no other piece in chess that can move all the way across the board in one move.  That said, the King doesn't even try to catch her... and why should he?  He can only move one space at a time.  In addition, the whole world created moves backwards... and isn't this just what a good chess player does?  Doesn't he anticipate the moves that will be made next and then makes something which he believes will take him to that eventual anticipated move?

There were numerous themes that captivated me in this work, as well.  Nature and human structures were constantly changing into one another, reminding me that we are inevitably linked and everything we create effects nature.  The work was slightly more humours as well... I actually laughed when Carroll described a living plum pudding as having "a thick, suety sort of voice" which took me back to the first time my mother tried to use suet (beef or mutton fat) to make a plum pudding... how they were originally made back in the day.

Humpty Dumpty also makes an appearance, and contrary to the Disney movie... he is the one who comes up with the term 'unbirthday'.  In this work, we also hear the complete poem "Jabberwocky" and the lovely "The Walrus and the Carpenter" story.

Email ThisBlogThis!Share to TwitterShare to FacebookShare to Pinterest
Labels: book review, children's literature, classic literature, Lewis Carroll, Through the Looking Glass and What Alice Found There

I hate to say I have never read this book. I read "Alice in Wonderland" as a kid and had a terrible nightmare about it, so as a consequence I've never picked up either book as an adult. I may have to sometime. :)