Review: Oedipus the King by Sophocles 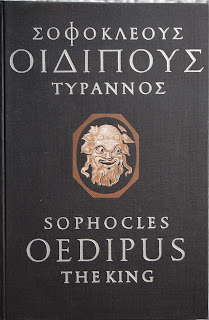 I'm about five reviews behind, which means that I've been reading quite a bit as of late and I've been too focused on my reading appetite to blog.  I have decided to put my reading on hiatus until I finish some reviews because my thoughts deteriorate with time - even more so now that I'm older.  :)

The journey into the Greeks, as I have mentioned, has been extremely rewarding.  However, you cannot really begin to understand what life was like in ancient Greece without delving into the tragedians of the time who created one of the few forms of entertainment - plays.

My personal viewpoint is that you should start with the very first celebrated tragedian and work your way through.  Aeschylus was the first, and you can check out my review of The Oresteia if you haven't gotten around to it.  Sophocles was the second and Euripides was the third.

'Oedipus The King', also known as 'Oedipus Rex' is the first in a series of three plays... the other two being 'Oedipus at Colonus' and 'Antigone'.  The story of Oedipus was very well known to the ancient Greeks, so it's important that when you're reading the play you understand a little bit about his background story.  The tale begins many years after the Fated event has already taken place.  For those of you with a background in psychology, Freud has slightly perverted the story of Oedipus.  Many have heard that an Oedipus complex means that you have an unconscious desire to have sex with your mother and take over the household from your father.  As I was reading Oedipus the King, this background information creeps in and you have to learn to put it aside.

Oedipus was not a man who purposely tried to sleep with his mother out of carnal lust or otherwise.  He was discarded from his family as a child, and an Oracle told him that his destiny was to slay his father and wed his mother.  Oedipus grew up with foster parents, and much of his energy was spent in assuring that the prophecies would not come true.  He stayed away from his foster father, and not knowing that he was abandoned as a child, and celebrated the fact that he did not slay his father when he passed away.  The audience in the play knows otherwise - Oedipus' life is tragic and one cannot escape Fate.

The whole play builds up to one thing - Oedipus finding out that he has already committed the sins he so longs to rebel against.  He is warned by his wife (who unknowingly is his mother) to not delve into the truth, but he ignores her and she eventually hangs herself and out of sheer hopelessness he gouges out his own eyes in torment. Other than the standard Greek self-pity, he is also most worried about the Fate of his daughters (the family name now being tarnished for all of history)... and I suppose we find out more about this in Antigone, the play named after one of his daughters. 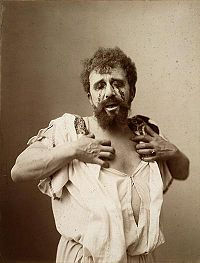 Oedipus leads a difficult existence, despite having several happy and successful years as King.  You do find yourself pitying him because his life efforts are spent trying to avoid the very things that are unavoidable - slaying his father and wedding his mother.  Presumably, his mother and father tried to avoid this Fate too by casting Oedipus off to be murdered shortly after he was born.  In this case, two generations could not avoid Fate.  The Greeks imply that you can alter your actions or decisions but that none of this matters - Fate will intervene and once the prophecies have been sent down from the Gods they are irreversible.  In psychology, a belief that your actions have no effect on your life is called an 'external locus of control', and there is something going on with the outside world that you can praise or blame when something positive or negative happens.

Sophocles was a very strong playwright.  What struck me the most about the difference from Aeschylus is that Aeschylus was much more technical and had the feel of a historian, while it seemed Sophocles tried to strip the story down to its bare bones and let the audience breathe their own life into it.  I believe that it reads less well than Aeschylus, but would probably be received much better on the stage - where it was intended to be portrayed.  The depth of Sophocles, contrary to Euripides, comes from the story alone and not the dialogue.  I have a blank quote page in front of me - there were no lines that stood out as being remarkably enriching to me.  All of the power is in the story, and I suppose that the purity would have transferred well to the stage.  As I read the work I could see the Greek Colosseum, hear the people and smell the air... and I think it's important that this work allowed me to do so, and also provided more insight into the tragic story of Oedipus.
Posted by Eclectic Indulgence at 4:21 PM