﻿﻿There I was sitting in my hostel in Nottingham after just finishing Ben-Hur, and I came across a copy of Henry V by Shakespeare (eventually passed down to a friend in Luxembourg).  Somehow or other, a few weeks later when I arrived in London... I went to go see a show at Shakespeare's Globe - and as it turned out, they were playing Henry V.  I only read the work AFTER the play, which is generally in the opposite order I usually do these things. I was incredibly surprised on how more enjoyable the overall experience was following this methodology. Since Shakespeare is supposed to be watched MORE SO than it is read. I think this inherently makes sense.

Henry V at Shakespeare's Globe was quite breathtaking, despite the tremendous uncomfortable feeling present in my seating arrangement.  I have long legs and I sat in the front row with a wooden railing in front of me - I was never comfortable and it took away much of my concentration on the dialogue.  This play was quite enjoyable and stimulated much further research into the King and the story itself.  I do also remember thinking that the movie adaptation with Kenneth Branagh was one of the better Shakespeare film adaptions I've seen (along with Hamlet with Kenneth Branagh, if I recall correctly - unsure if I enjoyed this one more or less than the Mel Gibson version). 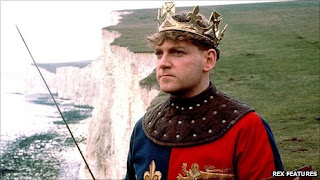 In summary, the play is about the events pre and post The Battle of Agincourt, a battle between the English and the French in 1415.  The battle is won by the British, and according to the play, there is such an extreme difference in body count that Henry V believes that God has intervened on his behalf.  The best part about the play is Henry's personal struggle between doing what is good for the people and what is good for himself, along with overcoming the legacy of his father.  These are classic themes and Shakespeare really allows you to FEEL them as you read the play.  Like most Shakespeare, there is an ample supply of wit - both intelligent and bawdy.  In addition, like Shakepeare Histories, there is a 'happy' ending... when Henry marries the French princess. I believe the ending is drawn out too much - with all the signing of documents, courting, etc... but this will be a matter of preference.  It reminded me of the feeling I had when reading the last instalment of the Lord of the Rings, The Return of the King, which seemed like the ending took so long to wrap up that it didn't feel like an ending anymore.
﻿

So, as you can tell this is not a strong 'review' and should probably not even be classified as such.  This lack of detail is a direct result of me not writing down any of my views as soon as I finished watching the play or reading the work.  Would be interested to know what YOU think of it - perhaps it will bring some of my personal thoughts back.  Shakespeare, I believe, is best when discussed and dissected.
Posted by Eclectic Indulgence at 2:42 PM

I loved the movie & watched it after I'd read the play while listening to the Arkangel audio produced by the BBC. Kenneth Branagh really brings Shakespeare to life. Stumbled across your blog and enjoyed reading your reviews.