Vonnegut Dies... so it goes 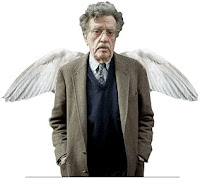 As stated before, Vonnegut had a special place in my heart because he worked at the same company that I'm currently at, for a good period in his life. He was still able to overcome this, and become a great writer (there is hope :o). Rest in peace, my friend. The following excerpt is from CBS/AP (article is available on the right side of the page).


From CBS/AP:
Vonnegut once said that of all the ways to die, he'd prefer to go out in an airplane crash on the peak of Mount Kilimanjaro. He often joked about the difficulties of old age.
"When Hemingway killed himself he put a period at the end of his life; old age is more like a semicolon," Vonnegut told the AP."
My father, like Hemingway, was a gun nut and was very unhappy late in life. But he was proud of not committing suicide. And I'll do the same, so as not to set a bad example for my children."
Posted by Eclectic Indulgence at 5:40 PM