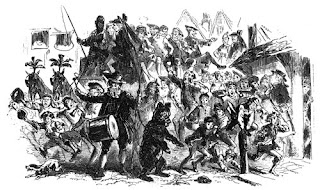 In normal circumstances, after creating a list of 20 Novels I'm Ashamed I have NOT read, I would have continued to go about my daily life and paid no attention to said list.  If I'm ashamed I haven't read these books, why would I procrastinate in reading them?  I'm not sure what the answer is [length of novel, intimidation, creating structure to selecting books when I prefer limited structure, etc], but I know that is how I would react.
Thus, when I finished this month's bookclub book early, I vowed to read at least one of the books and I'm in the heart of "A Tale of Two Cities" by Charles Dickens as you read this.

As is customary on Fridays, here is the beginning of the novel:


It was the best of times,

I like the opening to the novel, but I wouldn't regard it as some due as the best opening line of all-time.  It tells me that opinion is subject to interpretation and that history repeats itself.  I don't think it tells me all that much about the novel - the opening seems a bit more flash than substance.  What do you think?
Posted by Eclectic Indulgence at 2:13 PM

Email ThisBlogThis!Share to TwitterShare to FacebookShare to Pinterest
Labels: A Tale of Two Cities, Book Beginnings

I think it is memorable and unique. Very recognizable!

I think it's a beautiful and poetic opening. I agree that it doesn't tell you very much about what is to come, but sets a tone for Dickens' writing style. I hope you enjoy it. I am ashamed to admit I've never read this & most of Dickens' other classics, but this project of yours is so ambitious that I'm inclined to try it :o)

It was the age of being paid by the word. :)

But it is a memorable opening and one of my favorite Dickens books.

Hey, I just found you on the Hop and glad I did! I look forward to your reviews.

I'm stopping by via the Hop - I, too, read classic literature, and it's nice to find someone who does so as well. Haven't read A Tale of Two Cities yet, and I didn't realise that the above opening lines belonged to it; they're quite familiar. Anyway, am subscribing now - you've got a great blog.