Review: The Republic by Plato 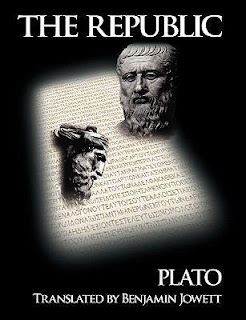 I'm afraid of this review, because it's been SO LONG since I read the Plato's Republic.  I don't really want to screw up a review on so important a work.  Thankfully, I have a few notes jotted down that I can read.

The work centres around the dialogue between Socrates and other political/philosophical figures (Polemarchus, Glaucon, Thrasymachus, etc) and begins by attempting to define justice.  The definition is debated and numerous attempts to get to the heart of the meaning exist through debates between the men.  Various examples are made and they're attempted to be viewed from a quasi-scientific and philosophic perspective.  Many ideas presented are sound, but many seemed to me to be based on fallacies.  The philosophers' goal is to fabricate a society from scratch that will propagate justice and nullify injustice.

The entire book is based on the dialogue between philosophers and at times it can be methodical and at times feeling inconsequential.  As a reader, you may not relate to all the principles or even care about some of the subjects being discussed, but many are important and I would anticipate cutting edge for ~380BC.

There are some great discussions on how leaders should set-up a society/republic from the ground up.  What sorts of professions are important, what sort of education should be focused on, family concerns, military acumen, etc.  Many of these discussions are profoundly interesting.  I'll talk a little about family structure.  Socrates states that children bred by guardians are the most desirable. Guardians 'guard' the city and are well educated and athletic - think of them as intelligent warriors.  Guardians would have the choice of whom to mate with in an effort to pass along the best genetic material to future offspring of the republic.  All commoners (referred to as 'iron' or 'copper' citizens) could have children as they saw fit.  The offspring of the guardians would be taken away from their family and reared as citizens of the Republic.  In this way, all sons and daughters were of the Republic and each person was in turn a mother or father to all children.  Children from iron workers would be taken away, where they would assume the same treatment would take place.  However, these children would be killed.  It's a very interesting biological concept (I cannot help but think this may bring about unknown incest), which would in theory propagate the advancement of stronger genetic code.  I would think that the breaking of the mother/child bond would be particularly hard to enforce and their would be rebellion.  It reminds me a lot of communism - perhaps good in theory and impossible and in some cases horrible in practice.

You would think that in 380 BC, the specific rank of 'Guardian' would be regulated to men only. However, Plato shows that he was one of the very first rights activists for women - believing that if women had the strength necessary then they should be considered for the job without prejudice against gender.  Plato/Socrates states that this is controversial but insist upon it anyway - very progressive for nearly 2,400 years ago.  Women weren't even granted the right to vote in the United States until 1920!  Sad that it took over 2,300 years to learn from Plato's thoughts on equality.

There is also a lot of discussion regarding the life cycle of a republic and how it can progress from Timocracy to Oligarchy to Democracy to Tyranny.  I found this quite fascinating and I think these particular discussions should be debated by every political science student in university.  It's interesting to try to place Canada in one of these government models... I suppose it would say a lot about each of us as to where we think we fall.  I could see many Socratic debates in present day, stemming from this discussion.

The concept of ignorance is heavily discussed in this work.  How ignorant should people be about other aspects of the outside world, of certain subjects, etc.  Plato mentions the importance of creating a rank for people in society as either gold (leaders/philosophers)/silver (guardian)/iron or copper (workers) based on their skills, knowledge and fitness.  What struck me as progressive was that any person could move based on merit and not based on which band they were born into.

Socrates criticizes and praises Homer, but insists that all poetry should not have intervention from Gods.  If I recall correctly, this is because he believes in accuracy of history and rooting education based on truths alone.  It gets a little shady in his discussions about poetry and books, as Socrates seems to believe heavily in censorship.

There is simply too much to remember and discuss in Plato's Republic, but there is no question in my mind that this should be a must read for everyone who can handle it.  I would think that replacing a Shakespeare work (blasphemous, I know - maybe a comedy?) with The Republic would be a very strong move for furthur education of students.  I'm not sure how many high school students could handle this and most would probably resent the experience, but I think that it would open a few eyes as well and get children thinking about how to change society for the better from an early age.  As everyone knows, they are our future. :)

In conclusion, give this book a read and when you find yourself mired in muck (verbage, ramblings, etc)... take a break and then keep going.  I found this a truly worthwhile experience and months later the concepts and ideas have stuck with me and I find it stimulates further ideas on societal and government matters.
Posted by Eclectic Indulgence at 2:41 PM

Thanks for the interesting commentary. I too have some fuzzy memories since I last read the Republic several years ago. I do remember being struck by the fact that it seemed to be full of both brilliant ideas as well as what seems to us today, Orwellian and oppressive concepts. As you point out, some of the ideas do remind one of communism. If I recall, Plato advocated things like abolition of the family, censorship, rule by the elite, etc. Of course, the modern reader has the enormous advantage of hindsight as we have knowledge of regimes that actually attempted to practice some of these really terrible ideas.