This will be more of a mini-review, since it's been a few months since I read this novel with a few other books read in between.

A bit of background.  This is one of the many sequels to Ender's Game, which is divided into two sagas: 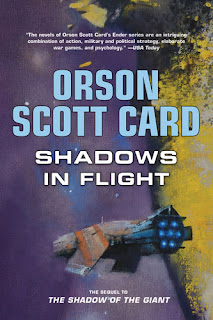 The story takes place where Shadow of the Giant left off.  Bean leaves his wife Petra and his 'normal' children and goes off into space with the three children that have Anton's Key turned on.  Anton's Key is a genetic defect which gives these children mental capabilities far surpassing their age, and also makes them very tiny physically.  Eventually, their bodies will continue to grow and they will experience giganticism and die in their twenties when their heart can no longer pump blood to their extremities and generally keep up with the oxygen needs for their massive bodies.

The three children and Bean ('The Giant') cruise around space in an effort to keep Bean alive to help them figure out a solution to turn off Anton's Key so the children (dubbed a new species), can survive.  Andrew (named after 'Ender') is the scientist, Carlotta is the ship's operations controller/engineer and Sergeant is the child versed in war.  They eventually meet a bugger ship in space which helps them unlock the Anton Key secret and Bean ends up dying in peace aboard the bugger ship.

To be honest, this book feels a lot like a money grab for Card, and this has been going on for awhile.  The book is a small one at 237 pages and is not the regular book size at 8.5" by 5.5".  The writing is generously spaced as well, though the price is on par of that for a novel and not a novella.

The story is a must read only for those that have read most or all of the other Ender works by Card.  It fills in a hole left at the end of Shadow of the Giant and gives you a more complete understanding of the overall story.  The humour is typical Card, shown through children with an advanced understanding of life.  Despite the intelligence, the children still act like children.  Their minds are growing and so is their wit, and this wit is present throughout the work.  I would say that Card over does it a bit, going on ad nausea for pages, and it just feels like he's trying to make the work longer.

This is definitely my least favourite of all the Ender works and I would hope that fans get something better in the next two releases for this series.

I'll leave off with the only quote I wrote down.  I've never found myself looking for a pen when reading Card, though I would assume that the best two books for quotes are Ender's Game and Speaker for the Dead.  This is from Shadow's in Flight:

"Love makes you a bad observer - you put the best interpretation on everything.  Hate is as blinding - you assume the worst." 237
Posted by Eclectic Indulgence at 1:12 PM

I need to pick this one up at some point. I really like both of the series, so of course I'll keep picking them up and reading them. :)