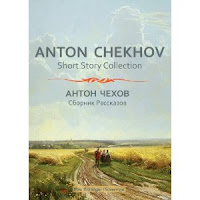 Short-stories are a difficult to review on the whole, even at the best times.  In my case, I have traveled thousands of miles (kilometers) as of late, it has been many months since I read this work, I have read about 10 books since these stories, and I didn't write down any notes!  This 'review' is an impossibility and it had been daunting for me, which is why I left it until last in my reviewing backlog.

I'm a big fan of the Russians greats, which I think I have documented here quite often: Tolstoy, Dostoevsky, Nabokov, Turgenev, Pasternak, etc.  I was lucky to have picked up a few of Chekhov's stories in Nottingham when I was traveling around; I thought that it would be a great idea to read a few of them on trains or before bed or at other moments where I didn't have very much time to read something seriously.   I had never read any short-stories by Chekhov before, but since he is well known as one of the masters of the short-story, I was excited to plow through them.

I read somewhere that one thing that many people struggle with is Chekhov's particular style in regards to the 'message' located within each story.  I found that the reviews I had read were correct - Chekhov leaves it up to the reader to decide which lessons to glean from most of his stories.  I believe he tells a story to have told it and once it's completed, he moves onto the next not really caring what readers THINK of it.  Chekhov was a physician before he ever became a writer and I could theorize that he just began to write for sheer enjoyment and not with a greater purpose in mind.  I don't pretend to know if I would be right in making this assumption, but it seems to make sense after reading these 24 stories.

I also agree that he seems to embody the Russian way of life (granted, I am fairly ignorant in a very good portion of their history), preferring to focus on common people as opposed to the aristocracy and 'elite' of society.  When I think back upon the stories many months after reading them, I can FEEL various scenes in the stories and I think that's indicative of a good writer.  I will definitely re-read some of these stories in the future and make substantial notes on my feelings about each one, and which ones are my favourites.  I'll now just present a list of which stories were involved in my edition (along with a small amount of quotations), more for my own benefit than anything else.  Would love to hear what you think of Chekhov's short stories or his only novel, The Shooting Party.


“why is it that even in the presence of great happiness, a man cannot forget his grief?”


“when a man is tired and drowsy he thinks that nature, too, is in the same condition.”


“No doubt that is one of the laws of society – the less an evil is understood the more bitterly and harshly it is attacked.”


“The more enlightened a man is the more he is given to reflection and hair-splitting; the more undecided he is, the more full of scruples, and the more timidly he approaches a task.”


“How many wrong and foolish deeds are committed in our country towns because we are bored!”

I just recently read some Chekhov short stories as well (The Kiss and Other Stories). Like you said, his style tends to leave the conclusion up to his readers. A couple of years ago, I took a course in Russian history - what I enjoyed most about Chekhov was exactly his lifelike depiction of the history/setting.

I currently read Chekhov's short stories also. I'm really concerned about which translator is the best. From what I know, Constance Garnett is the one that translated a lot from Russian greats to English and seems to be reliable.

Hi David,
I reaad Constance Garnett's translation of War and Peace and really enjoyed it, however I did come across an article that is really critical of her...

“The reason English-speaking readers can barely tell the difference between Tolstoy and Dostoevsky is that they aren’t reading the prose of either one. They’re reading Constance Garnett.”

Interesting what you say about the 'message' in Chekov's stories. Some of them reminded me of pithy little zen master stories - the story is written as though there is meaning there, but it's cryptic and ellusive. I thought the point was often just to show how meaningless it all is - 'this, like all things, will pass'.

I enjoy getting my gratifying short story fix from Chekhov (An Anonymous Story remains my favorite), and I think there's something beautiful about the way he allows the reader to draw their own conclusions - not unlike Turgenev?
Speaking of Tolstoy and Dostoevsky, they both attempt to spread their social or philosophical dogma through literature rather than focus on the individuals like Chekhov, and Turgenev (also with only two or one generation away from serfdom respectively), which I find refreshing.
I do think Garnett is reliable (as does my Russian mother, whose views on Russian translations I tend to mimic), but also blindly follow Ardis as a publisher for great Russian translations (perhaps foolish?).