Review: Sir Gawain and the Green Knight by Unknown 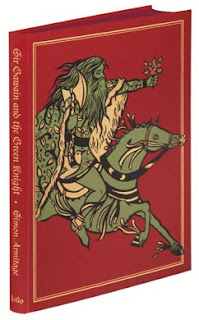 I cannot believe this is the first time I have ever read an Arthurian Legend.  Before a few weeks ago, I didn't know this work was part of said canon... me being notorious for not reading reviews.  In August I made a trip to the British Library and paid for a 'special exhibit', where I saw a copy of the Folio Society version of this work and based on the cover and a brief description, I was in love.  When I finally joined The Folio Society in December, I knew this would be the first work that I purchased.

The translation  of the Folio Society publication is by Simon Armitage and since I have no object of comparison, there is not very much I can say about it.  It had a simple flow and was definitely an easy read.  The illustrations by Diana Sudyka were not my cup of tea at all, with the exception of the beautiful cover... of of the most beautiful I have ever owned.  The Folio Society publication was fairly large, measuring 13" by 9 1/4" - I believe it was a little too large to read with on the couch and my roomie thought it was a little humorous.  There was a lot of blank space on most pages, but for those that love the feel of great paper, this was up to the usual thick standard with a creamy ivory colour.

The work itself is about a Green Knight that comes at Christmas to challenge the Knights of King Arthur to a holiday 'game'.  He is completely green, from his clothing to his skin... and even his horse is green.  He challenges anyone to cut of his head with an axe and if he lives, in one year, he gets a chance to cut off the antagonist's head - a sort of 'head for a head' thing.  Why anyone thinks this is a cool party game is beyond me, but King Arthur accepts the challenge when no one else will.  Sir Gawain stands up to the Knight simply to take Arthur's place.

I won't go into what happens from there, but the tale is all about honour, truth, sins of men and the temptation of men by women (see quote below).  The tale in itself is told quite simply, but has a wonderful message.  While Sir Gawain lives by an honour code, even he can fall off track when encountering certain situations in life and he must constantly remind himself of this to stay on what he believes is a righteous and honourable path. 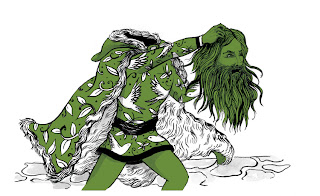 I would like to eventually read the translation by J.R.R. Tolkien.  Tolkien was influenced by many of these ancient works including this one and Beowulf which were instrumental in the crafting of his fantastical world.

I'm glad I read the work in general - it has a good message and I didn't see the plot twist coming, and while it gave me a good preliminary feel for Arthurian legends, it didn't have the impact of some of the other ancient works I have read as of late... such as Gilgamesh & The Song of Roland.

-------------------
QUOTATION:
"'And mind you commend me to your mannerly wife, both to her and the other, those honourable ladies who kidded me so cleverly with their cunning tricks.  But no wonder if a fool should fall for a female and be wiped of his wits by womanly guile - it's the way of the world.  Adam fell for a woman and Solomon for several, and as for Samson, Delilah was his downfall, and afterwards David was bamboozled by Bathsheba and bore the grief. All wrecked and ruined by their wrongs; if only we could love our ladies without believing their lies. And those were fellows from fortunate families, excellent beyond all others existing under heaven,' he cried.  'Yet all were charmed and changed by wily womankind.  I suffered just the same, so clear me of my crime.'"
Posted by Eclectic Indulgence at 4:49 PM

This book is on my to be read list. I don't see any Daphne DuMaurier books on your blog?? Rebecca and Jamaica Inn are my favourites. Only came across her books about 2 years ago & love the way she writes.

You should try Idylls of the King by Alfred Lord Tennyson. I know you can get it for free online. Tennyson was the first to really get me interested in the Arthurian legends.

Thanks for the recommendation, Gwyn. It's been on my list for awhile but I'll move it closer to the top. ;)