Review: Song of Roland by Unknown 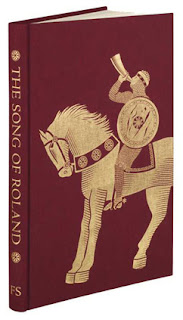 "The Song of Roland (La Chanson de Roland) is an heroic poem based on the Battle of Roncesvalles in 778, during the reign of Charlemagne. It is the oldest surviving major work of French literature. It exists in various manuscript versions which testify to its enormous and enduring popularity in the 12th to 14th centuries. The oldest of these is the Oxford manuscript which contains a text of some 4,004 lines and is usually dated to the middle of the twelfth century (between 1140 and 1170)."  -Wikipedia


I had never heard of The Song of Roland before my membership with The Folio Society, but I'm glad they introduced me to this work.  This particular edition is translated by Charles Scott Moncrieff and illustrated by Anna and Elena Balbusso.  It's hard for me to comment on the translation, but I found this work incredibly poetic and very easy to read.  The illustrations were hit and miss for me - a very modern take that I don't really think fit the work.  Some of the illustrations, such as the one further down in this review, were quite stunning.  The cover presented is BEAUTIFUL... and I think, very representative of the story and, in this case, the most poignant scene of the poem.

This story is really about a battle between Pagans and Christians, the Christians (Romans) attempting to take over large amounts of territory to pass along Christianity to others with 'inferior' religions.  King Charlemagne is about to wage war with King Marsile (Muslim), but offers treasure and conversion to Christianity if Marsile and the Franks will go back to France.

Roland's stepfather, Ganelon, becomes a traitor in order to get back at Roland for volunteering him to be the messenger of the offer. They betrayal of Roland and the Christian Knights leads to their slaughter.  Roland's pride becomes his downfall when he refuses to blow his horn (olifant) when he sees that he is outnumbered.  He acts on courage and the belief in God - he himself believing that he is fated to die.  After everyone dies, he finally blows his horn... bursting his temples and causing his own martyrdom.  He is met by a saint who takes him to Paradise. 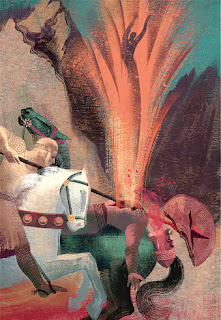 King Charlemange comes to the call to bury the dead and mourn the loss of his nephew.  He is eventually met with a Spanish Muslim contingent which is destroyed.  Ganelon is quartered for his betrayal and those who stood up for him in his trial are subsequently hanged.

The ending of the work, I believe, is the best part.  King Charlemagne has another dream (the first from God, warned him about the treachery of Ganelon - which he believes is fated and cannot be stopped) that tells him that he must continue to push on to battle with another foe - I suppose to continue to spread the message from God (Christianity).  He is tired, but realizes that man does not choose his own path and he must follow what is presented to him.  This reminds me of my favourite Steinbeck quote, "You don't take a trip, a trip takes you."  I think that if you let yourself be open to things the universe will guide you.  I believe we each have the power of choice, but I believe we are given cues to follow and can choose to do so or not.  King Charlemagne is clearly put all his faith in these cues, which he believes come from God.  Giving up your control to a 'greater power' creates quite a struggle and this struggle is evident with Charlemagne and is captured quite beautifully.

This work was a little too 'rah rah Christianity' for my liking, but is quite fascinating when looking back on the believed cleansing by Christians over 1,200 years ago.  The blood-thirsty revenge seems very un-Christian on the surface, but this gruesome slaughter was seen as justice and not as cleansing... and I suppose the same could be said of Hitler's belief in the genocide, though not based on religious principles.

The pride of Roland was quite frustrating and proved to be his Achilleus' heel.  This was one example in the poem that showed the characters in the Song of Roland to be quite human... both with strengths and flaws.

I'm quite glad that I read this work - it has left quite an impression on me.  I think I will eventually do some more research into the beginning sweep of the forces of Christianity.  I know there is a new set from The Folio Society called 'Pagans and Christians' by Robert Fox Lane... and I believe I will keep my eye out for this one.  If anyone has read that work or The Song of Roland, would love to know your thoughts!
Posted by Eclectic Indulgence at 3:40 PM

Email ThisBlogThis!Share to TwitterShare to FacebookShare to Pinterest
Labels: book review, fiction, The Song of Roland